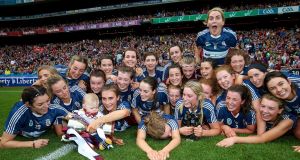 Anyone who’s been to a big game in Croke Park in recent years knows the drill at the final whistle. One set of players falls to its knees, the other skates and skitters around the place looking for each other to hug. The bleachers let loose, the referee blesses himself in relief at the end of the ordeal. And over it all, droning from the tannoy, whatever county-specific ditty the powers-that-be choose to attach to the winners gets played out.

Some of it can be quite joyous in the moment. When Donegal were rolling through everyone like a threshing machine in 2012, there was nothing in the world like the bouncing in the stands to The Hills Of Donegal. Some of it can be gorgeous too – it will be a long time before anything matches the feeling in the place when the first note of the late Dolores O’Riordan’s voice kicked in after Limerick won in 2018.

But for the most part, it’s tortuous stuff. I’m sure the lovely Molly in the Rose of Mooncoin was a delightful lady in her pomp. But for a lot of us, she’s reduced nowadays to nothing more than a slow death dirge confirming another Kilkenny All-Ireland.

And as for Molly Malone – what is it about Mollys? – please, spare us. The irony of a song whose signature line is Alive-Alive-O fostering an urge to kill in those who have to listen to it September after September is rich indeed.

Somewhere along the way, someone in Croke Park decided that every county needed a song. Fine. Quite why so many of them have to be love-sick odes to flaxen-haired cailíní (who clearly knew better than to be entertaining any of that oul’ shite in the first place) has never been explained. No doubt our salvation next Saturday if Kerry manage to spare us all the usual cockling and musselling will be a groaning version of The Rose of Tralee. It’d nearly make you wish for another draw.

Anyway, here’s the thing. None of this would be worth giving a second thought to except the Westmeath camogie players won the All-Ireland intermediate final in Croke Park yesterday. And what did the geniuses in charge of the music come up with to herald their victory? None other than Joe Dolan’s finest – The Westmeath Bachelor.

Not making this up, swear to God. A song about a 63-year-old man’s determined escape from the clutches of the tricksy women who want to snag him for a husband was ringing out over Dublin 3 as the Westmeath camogie players were melting into each other down on the pitch. Think of it as Gold Digger by Kanye West but deep in the Irish midlands.

(For the uninitiated, some sample lyrics…

Last Thursday at the market in the town of Mullingar/

A friend, he introduced me to a famous movie star/

She was married several times before to men of every creed/

And she thought she’d found a sucker in the bachelor from Westmeath.)

Now, obviously, har-de-har, sure it’s only a song. A beloved old folk song at that, one that goes back generations and isn’t supposed to be taken literally. And no, sure nobody takes it seriously and sure the players didn’t even hear it anyway. And yes, yes, of course no offence was meant. And actually, you’re a snowflake and a communist if you think any different.

Joking aside though, that nobody thought to pause and consider what was what on the day of the All-Ireland camogie final is surely a bit telling. Three finals, six teams, five songs (Galway were in the senior and intermediate). Can’t be that hard for someone to go, “Hang on lads, are we sure we’re going with the Bachelor song if Westmeath win? What’s it about anyway?”

Of course it feels like a tiny thing to be giving out about but in case nobody noticed, that’s what patriarchy is. It’s a million little eye-roll moments, none of them particularly harmful in and of themselves. But when you put them all together, they add up to a fairly tiresome day out for half the population without (maddeningly) the other half even noticing.

They’re an indication of attitude, a balance of the stuff people choose to care about with the ephemera to which they never give a minute’s thought. Coming in the week where the women’s All-Ireland football final is about to be eaten whole by the replayed men’s final, it is, by comparison, extremely small beer. But it’s all of a piece.

After the senior final, the wondrous Niamh Kilkenny who had been the game’s outstanding player came in and spoke beautifully. Galway are in the women’s football final next weekend as well and Kilkenny, a secondary school teacher, knows well that days like these are pebbles in the pond. The ripples go out long after the music plays.

“You see a lot of young girls since we won the semi-final in Galway jerseys hitting the ball around,” she said. “There’s a lot of talk about the finals, be it ladies football or the camogie. It’s great to see young girls really wanting to play and stay playing. The age group girls falling out is 16 or 17 and you want to keep pushing them on. We had a meet and greet day there and the amount of young girls that came out. Even if it just keeps someone playing and pushing on, it’s massive.”

When the long whistle went at the end of the senior game, the winners got Galway Girl. A grand uplifting tune, as it goes. Still, oddly enough, a song about a man chasing after a woman, but at least it soared. At least it was a tribute to womanhood in all its glory. That kind of thing, you can get behind on camogie final day.

The story of some grotty old bachelor proudly declaring his opposition to ever having a wife, maybe not so much.