Gaelic football must expand to keep up with Dublin and Kerry

On Saturday both teams played football from another planet. The game is forever changed 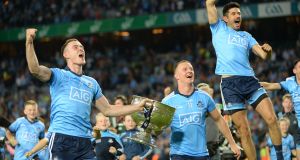 News comes this hairy Monday morning of a last-minute change to the GAA’s proposals around a tiered football championship. After looking at it every which way and taking the good of all stakeholders into account, it has been decided that there will, as already proposed, be two tiers. It’s just that in a slight but necessary tweak, Tier One will now contain Dublin and Kerry only, while the other 30 counties will lash away at each other in Tier Two.

The All-Ireland series for the Sam Maguire will be played off as a best-of-three affair. One game in Killarney, one in Croke Park and the decider, if needed, in Thurles. Tier Two will be played off in a blitz on a Saturday morning – after all, John Horan insists that the Dubs usually play on a Saturday night, so standards must be maintained. The whole thing will be run off by the end of March and nobody will ever give out about the plight of the club player ever again.

Okay, maybe not. Not yet at least. Come back in 2024, though, after the sixth Dublin-Kerry final in a row and we’ll talk then. Put it this way – at half-time on Saturday night, it wasn’t such a fanciful thought. The two teams had kicked 20 points between them, all but three from play. Dublin hadn’t kicked a single wide, Kerry hadn’t dropped a single attempt short. It was football from another planet.

In the aftermath, a couple of thoughts occur. One, much in the same way as Barcelona’s possession game changed soccer from the mid-2000s onwards, Gaelic football really has no option now but to keep expanding and marauding if anyone else is to keep pace with these two. The dreary old days of 15 behind the ball as a starting position have to be washed out with the tides.

Between the drawn game and replay, a picture floated around online of a Derry club game with one team pushing 13 players up on another’s kick-out. In the GAA, the best expression of innovation has always been widespread imitation. The sport needs a heavy injection of that sort of bravery of spirit, be it on the opposition kick-out or in encouraging forwards to be forwards and not just repurposed worker-bee wing-backs.

Hanging in and hoping to be within six points of Dublin or Kerry with 10 minutes to go is death by slow puncture. As in every possession game, there will be times when everyone falls back behind the ball – both sides took turns doing it on Saturday night as they decided to concede the kick-out. But it can’t be your calling card, as it is with the likes of Tyrone and Monaghan. There’s no future in it.

The other thought is that for all that the first three halves of the drawn game and replay were thrilling, Dublin still came out on top, and comfortably so at that. Essentially, Kerry had to go away and win five All-Ireland minor titles in a row, they had to jimmy out jewels as rare as David Clifford and Seán O’Shea to go along with established All Stars in David Moran and Paul Geaney and the lads. And still all it was good for was to keep pace with Dublin for three-quarters of the race.

In truth, that’s probably a of a bit glass-half-empty way of looking at it. Simple maths and chronology ought to have warned us not to expect a whole lot beyond what Kerry were capable of here. Fifteen of their panel played in their first All-Ireland final in the drawn game. Saturday night was the first time Peter Keane had lost a championship game with Kerry through senior and minor football. That’s 26 matches waiting for his first defeat. Just as his players will learn, so will he.

Had Kerry managed to pull this off, they would be no less a work in progress. Even as the season has progressed, they’ve evolved in giant steps. The team that gave up three goals to Cork in the Munster final went 140 minutes against the great attacking ogres of the age, and it took a couple of jet-heeled wing-backs to raise green flags against them.

Shane Ryan isn’t Stephen Cluxton yet but in a deathless endgame against Tyrone, and again through an All-Ireland final and replay, his kick-outs were stress-tested to the max and his nerve and accuracy didn’t falter. He is a safe pair of boots in that realm now – something Kerry haven’t had for a while and something they won’t go anywhere without. Now they need him to move up to the next rung on the ladder and be properly weaponised.

They need more bodies coming in as well. They’d mortgage Torc waterfall for a couple of sticky corner-backs, but they’re by no means unique in that. Tom O’Sullivan won’t have Con O’Callaghan to shadow every time he goes out, but the two games did make it look like his brand of man-marking is more suited to the half-back line than in the shadow of the posts.

Farther up the pitch, it will have done Kerry people no good to hear about Mark O’Connor getting on so well for Geelong last Friday. The suspicion that he and fellow AFL go-getter Stefan Okunbor are unconscionable losses to the Kerry cause grows with every dispatch from Down Under. But there’s no point dwelling for too long. The Pacific will not drain. Kerry will not run out of footballers.

At least, they better not. Though it sticks in the throat to even whisper it, the rest of us need them. You want to know the very worst thing about Dublin’s five-in-a-row? It makes the rest of the country have to fight against every natural-born instinct we ever had and actually root for Kerry to rise up and give them a game.

Of all the evils to set up on a footballing nation, Jim Gavin and the lads must never be forgiven for that.