Malachy Clerkin: Covid Supervisors are the only ones who should be whingeing 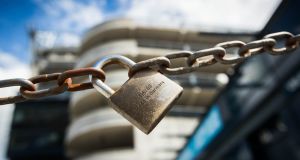 The urge to find something to be cranky about in the GAA is undefeated longer than the Dubs will ever be. Photograph: Ryan Byrne/Inpho

God, it’s great to have it back, isn’t it? We wondered could life ever be sane again. It had all seemed so pessimistic, so hopeless. For the givers-out, it looked like all the GAA were offering up to them as bait was the usual grinding inertia and there’s only so much mileage you can get out of giving out about that.

Yes, you will check everyone’s temperature on the way into training. Yes, you will be in charge of the disinfectant and can deputise who you like to help you clean the kit

But then, to quote a line on the wall of our young one’s creche, just when the caterpillar thought its life was over, it turned into a beautiful butterfly. Out came the GAA roadmap and in a trice, the givers-out had purpose again. Now they can give out all they like, as if 2020 is just another normal year.

People have no chill. Even now, with life slowed to a crawl, perspective seems to be a luxury. The urge to find something to be cranky about in the GAA is undefeated longer than the Dubs will ever be.

There is but one person who can rightfully grumble here. Well, one per team. All across the country, there will have been a slowly dawning sense of dread since the weekend among a certain cohort. By which we mean the poor unfortunates who know in their bones that they are about to become their club’s Covid Supervisor.

Oh, they know. There is only a small group of people in any club who will be (a) competent, (b) willing, (c) persuadable or (d) any combination of the three to be handed such a job. They know who they are and if they haven’t heard yet who is going to get saddled with it, they will be getting increasingly worried. It’s like Matt Damon says in the poker movie Rounders – if you can’t spot the sucker in the first half hour at the table, then you are the sucker.

Covid Supervisor. You can just imagine the GAA tricking around to find the right term to use when they were drawing up the roadmap. Covid Officer sounds a bit too run of the mill.

Covid Secretary makes it sound like you’d be drowning in paperwork. Even if that’s the case, you’re better letting them find that out as they go rather than putting them off before it starts. Covid Ambassador is too plummy. Covid Hero? Too condescending.

The putative start of the intercounty championships is October 17th. That’s 18-and-a-half weeks away

So Covid Supervisor it is. It implies just enough authority to attract those who quite fancy the idea of bossing people around, while keeping them at a safe distance from any actual power. The Covid Supervisors will be the Gareth Keenans of the association. Yes, you will check everyone’s temperature on the way into training. Yes, you will be in charge of the disinfectant and can deputise who you like to help you clean the kit. No, you will not have any input on team selection.

We will, then, make an exception for the Covid Supervisors across the land. They are entitled to their surly demeanour, if they choose to walk around with one. They are about to be handed the ultimate pain-in-the-ass job and will henceforth be Doctor Buzzkill to everyone in their club or county set-up. They have every right to complain. The GAA should give them all Dick Clerkin’s phone number for that express purpose.

But as for everybody else – can we not lighten up a little? In the darkest days of mid-April, most of us were resigned to the GAA being something that was heading into a long spell of cold storage, possibly even for the rest of the year. Yet here we are, less than three weeks from pitches opening and just seven from club championships kicking off. All this week, officers in every county are meeting up to see how Cúl Camps might work.

The putative start of the intercounty championships is October 17th. That’s 18-and-a-half weeks away. For a sense of just how far off in the distance that is, consider that if you spin the calendar back by 18-and-a-half weeks, you land on January 31st. Which, by pure coincidence, is the day two Chinese tourists were taken into isolation in Rome – the first confirmed cases of coronavirus in Italy. The global number of confirmed cases that day stood at just over 7,834. As of yesterday, that number was 7.2 million.

Unless you’re about to become Covid Supervisor. In which case, may your god go with you.

1 Next stop the Champs-Elysées in green for Sam Bennett
2 Lance Armstrong’s latest move serving him well on many fronts
3 Saracens’ emphatic opening salvo enough to keep Leinster at bay
4 Born to ride, born to win: Sam Bennett, the making of a green machine
5 Maro Itoje proves he has no peer in the northern hemisphere
Real news has value SUBSCRIBE