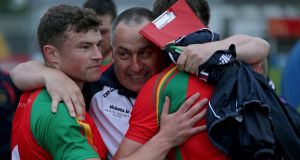 Turlough O’Brien has stepped down as manager of the Carlow football team. Photograph: Inpho

Carlow footballer manager Turlough O’Brien has stepped down from his role after six years in charge of his native county.

O’Brien was in his final year at the helm, but rather than complete the season when intercounty training resumes in September, he has brought the decision forward to facilitate a smooth transition into next year.

The GAA on Friday released its Covid-19 Safe Return to Gaelic Games plan for the weeks ahead - training will recommence for all county teams on September 14th and the intercounty championship will begin no sooner than October 17th. There is a possibility the All-Ireland championships could run into 2021.

In 2018 O’Brien led Carlow to promotion from Division Four for the first time in 33 years, before registering a first championship win over Kildare since 1953 to reach the last four of the Leinster championship. Their dreams of a first final appearance since 1944 were dashed by neighbours Laois in a four point defeat at Croke Park.

A county board statement on Saturday confirmed the news:

“We will never forget the special days in 2017 and 2018, particularly those sweltering evenings in Netwatch Cullen Park, when we took on some of the best the country has to offer under O’Brien’s stewardship.

“The most memorable of all however, must be that famous afternoon in Tullamore when the Manager led our team to a famous Championship victory over Kildare en route to the Leinster semi-final.

“The absolute professionalism, utter dedication and unbridled passion which Turlough brought to the Carlow senior football set up over the past six years, alongside his various backroom staff, has undoubtedly elevated Carlow’s football status to new heights.

“We take this opportunity to thank him unreservedly for all he has done during his tenure and we wish him every success and happiness for the future. He truly embodies the spirit of ‘CarlowRising’.”