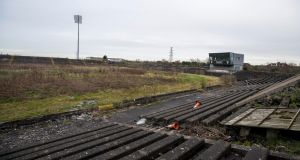 Like much of the impact of the pandemic shutdown, the effect on the GAA’s big infrastructural projects, worth a cumulative €160 million, has been that of a perfect storm, coming so soon after the controversies besetting the Páirc Uí Chaoimh redevelopment in Cork.

Although these plans are well advanced, Croke Park’s coffers are bare and a stay has been placed on all such development schemes. Similarly the counties have no money from their own gate receipts and sponsorship deals have atrophied.

As for all counties, there is the imminent problem of having to splash out non-existent funds on preparing teams for the proposed truncated championship and hoping that it doesn’t get wiped mid-stream by a second wave of coronavirus.

Casement Park hasn’t seen a match since Monaghan beat Antrim there seven years ago and after years of legal wrangling, sits in west Belfast in a state of dereliction, still awaiting the resolution of its long-running redevelopment saga.

Antrim had an All-Ireland football qualifier last year at home to Kildare and had to play it in Corrigan Park, the small home venue of the St John’s club, which ironically has already this year commenced an infrastructural project of its own.

The point has been made that had Casement been completed it may well have been idle this year anyway but that’s watery consolation.

Two of the other affected counties, Meath and Kildare, have been involved in the new All-Ireland football quarter-finals – the Super 8s – in the past two years in Páirc Tailteann and St Conleth’s Park respectively.

The counties were able to see at first hand the benefits of having a bigger, higher-spec stadium or at least the drawback of hosting big matches in old, dishevelled grounds.

Meanwhile down in Waterford, the advent of the round-robin Munster hurling championship, in which the county was allowed host matches last year, the desire to renovate Walsh Park and have a bigger, better equipped venue was all the more understandable given the guaranteed availability of championship hurling, which up to last year hadn’t been seen in the city since 1996.

The litany of delay and frustration that has plagued the Casement Park project has been well aired by now. Briefly restated, the planning permission granted by then Northern Ireland minister Mark Durcan was successfully challenged in the High Court in 2014.

The local GAA acknowledge that they may have moved too quickly on the project and the reapplication came after an extensive consultation project and capacity was reduced to 34,500.

There are no guarantees that there won’t be further challenges should the second application – now three years in the pipeline – be granted but the GAA are confident that their case is stronger this time.

Much of the new optimism surrounding the project is based on the re-establishment of the Northern Ireland Executive in whose absence the planning permission became a matter for the civil service. Regarded as a bit “hot to handle” for career bureaucrats, the matter has moved slowly.

Now with three nationalist Ministers in charge of the relevant departments – Sinn Féin’s Conor Murphy (Finance) and Deirdre Hargey (Communities) plus the SDLP’s Nichola Mallon (Infrastructure), who is dealing with the application – hopes were high that the project might proceed.

Costs, which had originally been estimated at £77 million (€86 million) climbed to £112 million (€125 million) and whereas the GAA’s original contribution of £15 million (€17 million) hasn’t been revised, the association believes that the scheme was always a public one with a contribution from the GAA rather than a joint project.

That was confirmed by GAA director general Tom Ryan in his annual report, which was published in February before the pandemic cut loose.

This position would, however, involve additional public funding of more than £30 million (€34 million) and this is proving a hard political sell for even sympathetic Ministers – both Murphy and Hargey visited the site just days after their appointment to office.

A decision on the planning application is expected in the coming weeks.

Ironically with the GAA set to be down anything up to about €50 million in revenue, the sense of urgency around the redevelopment may have eased a little, given all the uncertainty.

So the agreed Croke Park money, which organisers remain confident will materialise, won’t be needed in the short term, which is just as well in the circumstances.

There is though, a strong desire to see the stadium rebuilt as an anchor presence for Gaelic games in Belfast. Already the Gaelfast games development project in the city is seen to be a success but it is a pity that it takes place without the new venue to strengthen further the position of the GAA in Ireland’s second-largest urban area, where the status of the games had been in long-term decline.

Fundraising body Club Aontroma chair Niall Murphy told RTÉ only a few weeks ago that the completion of Casement was seen as “an equality issue”, given that rugby and soccer have already completed redevelopments in Ravenhill and Windsor Park, albeit at smaller cost and without any hitches.

That comparatively feisty view of the future isn’t as evident in the other counties. Both Kildare and Meath understand that they’re essentially at the mercy of what happens in the rest of 2020. Even if the roadmap back to some form of All-Ireland championship is followed without a hitch, funds are not going to be plentiful.

Both redevelopments have been earmarked for public funds with €4.875 million of Newbridge’s overall cost of €10 million announced last January as was €6.2 million for Navan and its phased development scheme, the first part of which is the construction of a new main stand, estimated at just under €12 million, and which ultimately will be an all-seater 21,000-capacity stadium.

Kildare would have hoped for GAA assistance with most of the balance whereas Meath, who had looked for €8 million in public money (from the Large Scale Sport Infrastructure Fund) have some leeway to make up and had been hoping that Croke Park could kick in up to a fifth of the cost, about €2.3 million.

Sources in both counties accept that the future is uncertain, as resources for capital projects will be scarce and however well the GAA manages to do out of its rescheduled season, 2020 will be about damage limitation.

In Waterford, the pessimistic view is that the Walsh Park project is “running third, behind Navan and Newbridge and by and large, parked” and that central assistance won’t be available until 2021 or 2022.

Deferral could push costs up from €7 million to €9 million, which even in normal circumstances would be unwelcome for a strapped county board even allowing that the design could be modified to defray costs.

Although some comfort is being taken from the GAA’s history of honouring such commitments, these are extraordinary times and there are are no easy reassurances for the time being.

1 Tour de France: Every yellow jersey winner must feel guilty by some association
2 Juan Imhoff and Racing 92 leave it late to end Saracens’ reign
3 Man United and Fernandes break Brighton hearts in 100th minute
4 Kevin Babington: Learning to live again after life changed forever on Long Island
5 Matt Williams: The sky is not falling in on Irish rugby - but Ireland do need a new plan
Real news has value SUBSCRIBE