Tipping Point: Backpass rule may be a welcome change but teams have little time to adapt 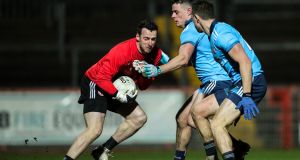 If a team is playing into a gale like when Dublin faced Tyrone on Saturday, what are goalkeepers to do? Photo: Tommy Dickson/Inpho

On the face of it, the latest Gaelic football rule change has the look of an eminently positive step. Beginning in this summer’s championship – although most likely left until the start of 2021 at club level – a goalkeeper can’t take a return pass from a kickout. So it was voted at Congress on Friday night, so it shall come to pass.

The move is a clear response to the changes in the game and is ostensibly aimed at encouraging risk-taking and curbing caution. Certainly some of the stats from last year’s championship would have helped make the case. When Galway played Mayo in the qualifiers in July, their goalkeeper Bernard Power had the most outfield possessions of anyone on his team. The goalie having the ball in his hands more times than Shane Walsh isn’t great, right enough.

The other stat from that game that stands out is that David Clarke in the Mayo goal also handled the ball more than any Galway outfield player. To be clear – the simple act of kicking the ball out isn’t included in those numbers, only the times where either goalkeeper handles the ball in open play. And since the majority of any goalkeeper’s open play involvements are from kickouts played straight back to them, those numbers suggest an over-reliance at best and an epidemic at worst.

So there’s an argument for the new rule, certainly. When it kicks in, however, keen eyes will be on the unintended consequences. Goalkeeping has evolved by exponential degrees over the last decade, to the point where only the most accurate kickers in any panel are considered for the role. If the kickout is reduced to a black-or-red roulette spin, will it go back to the mullocker days? Will the job requirements amount to little more than a bit of bravery in close quarters and a big boot for restarts?

Or given the state of the weather these days, with storms that seem to only get out of bed on the weekends when there’s a GAA fixtures calendar to mess about with, how’s this going to play out for teams facing into the teeth of a first-half gale? If teams aren’t allowed to use the goalie to retain possession, are we looking at games that will be out of reach by half time? Win the toss, push 14 men into the opposition half, run up a 20-point lead.

If that sounds alarmist, consider the Wexford-Kilkenny hurling league game a couple of weeks ago, where some of the puckouts could only make it to the 45 in the air before being blown back towards the goalkeeper. Whatever about hurling, try being an outfield footballer in those conditions, grabbing a kickout running back towards your own goal but without the option of playing it to the keeper. What are you meant to do now? Kick for touch?

Questions, questions. Points for debate at least. And yet, the following is how Motion 6 on the Clár at Congress 2020 played out. At 9.34pm on Friday night, it was proposed. The only speaker in favour was the proposer. Nobody else spoke for or against it. Not a single delegate felt the urge to ask a question, make a point or express the slightest bit of interest. At 9.36pm, it was passed.

Gaelic football is the country’s biggest sport. It deserves better than the two minutes of blithe meddling it got

In their defence, who among us has the stomach to be drilling down into the whys and what-fors of kickout strategy at half-nine on a Friday night? An hour when young folk – as in, the people who actually play the games – are generally fishing for Tinder replies or texting their dealer is not, by any stretch of the imagination, the best time to be elbow-deep in this stuff. What do they know of kickouts who only kickouts know?

So if the good folk of Congress had their minds on higher things just then, it’s hard to blame them. The presidential vote-counting was coming to squeaky-bum time right around then, the bar was beckoning, the weekend was kicking up a notch. No backpass from a kickouts? Sure! Sounds good. Tá. Níl. Whatever. Pint?

Here’s the thing, though. In the run-up to Congress, you couldn’t move for hurling people sticking their chest out and proclaiming themselves against the black card. Whether you agree or disagree, at least they had the debate. At least the idea got kicked around. At least the people who love the sport stood up for it.

Who stands up for Gaelic football? By the latest numbers, we’re talking about the most-watched sport in the country here, by some distance the most-attended. The second-most played team sport in the land. Who fights for it?

Who has a vision for it that they are passionate about and will argue the toss all day and all night about? Roll your eyes all you want about Joe Brolly and his ilk but at least he puts forward his idea of the game he’d like to see. Who else is up for that sort of argument?

Nobody in the big hall in Croke Park on Friday night at 9.34pm was. Outside of the rights and wrongs of the black card in hurling, one of the main reasons it didn’t stand a chance was the prospect of it coming in for this summer’s championship. Hurling people were rightly aghast at the idea of a fundamental change coming in with only a couple of months to prepare.

Where were the football people on Friday night? Does the rush to bring this in not make them uneasy? Whether it’s good or bad really isn’t the point. The championship starts in nine weeks, with club month in the middle. All but eight counties will meet for no more than two games outside challenge matches. Every serious team has a kickout strategy, worked on and honed over a period of years. Now they have to change it on the fly. No warning, no trial period. Just live with it, lads.

Gaelic football is the country’s biggest sport. It deserves better than the two minutes of blithe meddling it got on Friday night.