On a cold February morning, the tailback was slow approaching the Border Covid checkpoint 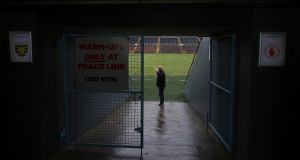 St Tiernach’s Park in Clones before the Ulster U20 Championship Final between Donegal and Tyrone at the beginning of March. Photograph: John McVitty/Inpho 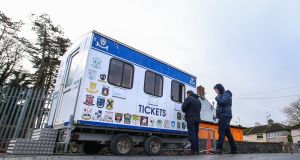 A ticket van in Clones ahead of the Allianz Football League Division 1 game between Monaghan and Dublin back in January. Photograph: Tommy Dickson/Inpho

The cars started gathering at the Border just after dawn on the day of the 2020 Ulster final. The February frost whitened the hedges along the road into Aughnacloy as the convoy of Tyrone fans snaked most of the five miles back as far as the Ballygawley roundabout. There had been talk of snow but no sign of it yet.

Not that it would have mattered. This game was going ahead, end of story. If the players had to dig out a fall of snow and line the pitch and hang the nets themselves, an Ulster final of some description was getting played. Things had been bad enough for long enough. Clones, here they came.

Cold or no cold, the mood was good. A few heroes were still sleeping off their Saturday night in the back seats, right enough. But they started to come around once breakfast was wafting through the air as the queue to get into the South inched along. The proprietor of Sally’s, the famous eating house on Aughnacloy’s main street, was proud to declare afterwards that they never came close to running out of sausages. No fear, hi.

Anyway, by now, they were used to the grind. The initial shock of the Border being reinstated in all but name had, for the most part, subsided. Now they just made time for it. When it happened first, the previous Easter weekend, everyone presumed it was just temporary. But then a lot of things were just supposed to be temporary during the Covid crisis.

Initially, of course, people were reasonably willing to do what was needed. Okay, it felt weird that there were Garda roadblocks on the M1 heading south, just as you passed the Carrickdale. And yeah, it stuck in the craw not to be allowed to cross from Strabane to Lifford without a letter stating your business. But they were desperate times and people sucked it up. The roadblocks disappeared after Easter, as promised.

That was back when we all still thought of the measures in finite terms. We talked about a time when things would get back to normal, as if there was an expiry date for what life had become. It took months for everyone to realise that it wasn’t going to work like that. Three weeks after Easter, the roadblocks were back out for the May Bank Holiday. And then again in June.

And soon it became a normal, humdrum thing. The virus had done in three weeks what three years of hard Brexiting couldn’t manage. Of course, nobody called it a hard Border, not officially. But no amount of well-meaning co-operation could change the fact that the crisis was being handled in two different ways in two different jurisdictions. And so anytime there was a chance of increased cross-Border traffic, the Gardaí were out at the pinch points.

Over time, it became clear that the Ulster Championship was going to be a tough sell. Now, nobody envied Croke Park in having to come up with a way to get it played. But it had annoyed plenty of Ulster GAA folk when they heard people in the South talk about getting the All-Irelands played off in late autumn. For that to happen, Ireland and the UK would have had to emerge from their respective lockdowns at the same time and subject to the same conditions. That was never going to happen.

When the restrictions started to be lifted in the South and the counties started talking seriously about getting the games up and running again, Ulster GAA people began to get that old invisible feeling. How could you organise the All-Irelands when six of the counties has been under different conditions all this time? Had people in the South even thought of that? The older generations rolled their eyes and said they weren’t a bit surprised.

Months had rolled into months. The clubs had come back first. Small gatherings. Controlled crowds. Nobody was allowed into a match now without a facemask. Nobody was allowed to play in one without a certified clear test. Any club found to have fielded a player with the virus – knowingly or not – had to pull out of the competition. It wasn’t a punishment, it was a precaution.

On the intercounty scene, the hurling championship had been fun. A bit surreal and run off like a blitz but it had done its job. Playing the final on the 100th anniversary of Bloody Sunday had been a nice touch. Mad how things sometimes work out that way.

But once it became obvious that the Ulster Football Championship couldn’t just kick into gear the way, say, the Munster hurling could, the gears of the football All-Ireland got all gummed up. The restrictions in the North lasted longer, plain and simple. It was nobody’s fault. It just was.

The advent of a reliable on-the-spot test was the game-changer. Once you were able to tell straight away whether someone had the virus or not, it changed so much of what could be done. In sport, in society, in life. The Garda roadblocks were out again but this time they weren’t turning people back on the basis that their travel wasn’t essential. This time, it was a simple prick test and you were free to go where you liked.

There was plenty of chat about simple pricks – and worse – in the Aughnacloy traffic that February morning. Quick and all as the tests were, checking four to a car in a five-mile tailback was always going to take a while. But they were willing to endure a lot they wouldn’t otherwise, given the times they were in.

And so on they went, their red and white garb ready for the day. Hats, flags, headbands, facemasks. Clones-bound, for an Ulster final like no other.