GAA delay decision on championship format until later this summer 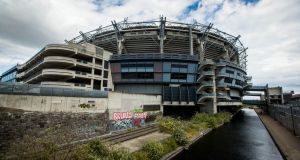 Despite the upbeat mood after its Covid-19 advisory group last week announced an accelerated return to Gaelic Games, the GAA won’t be rushed into announcing an actual championship format for later this year.

Although provisionally agreed to be straight knockout, and not beginning before the weekend of October 17th/18th, nothing else will be decided until the Government confirm Phase 3 of Ireland’s roadmap on Monday June 29th, and whether or not to compress Phases 3-5 into just two more phases, rather than the three phases that were originally planned, all of which may afford the GAA greater scope or otherwise around match attendances.

With that the GAA’s Central Competitions Control Committee (CCCC) will begin to explore the best way to run off the football and hurling championships, in association with the provincial councils. Last Friday’s Covid-19 advisory group report also indicated that it may spill over into early 2021, but only as far as February, although for now the jury is still out on the attendances that are likely to be accommodated.

“It is a matter for the CCCC, to begin that process, and that process won’t begin until after Phase 3, and the confirmation that the country is moving on again from Phase 2,” said Feargal McGill, the GAA’s head of games administration and a member of advisory group.

“So there is still a lot of work to do before we can announce anything, and it will take time for the CCCC to sit down and start drawing up a fixtures’ programme. But there’s no point in announcing anything around that until we’re sure we’re moving on to Phase 3, and that’s been the process all along. That’s still the timing, and that’s how it will be handled.”

On the question of how much time the GAA may need to run off the 2020 championship, including the intention to run the underage inter-county championships at minor and under-20 level concurrently, McGill was unsure.

“Nothing has been discussed yet, again that’s a matter for the CCCC. It was only last Friday that we agreed to enter this current phase, so it will be a while yet. This is the first time we have even a rough idea of what time is available to us.”

The question of match venues is also likely to be central, and whether or not they opt for larger provincial and county venues only in order to maximise attendance and gate receipts and salvage something more notable from the heavy impact of the pandemic shutdown. Either way the 2020 championship will to some extent be about damage limitation.

GAA president John Horan has already indicated the Hill 16 terrace at Croke Park could become all-seater, as part of temporary measures put in place by the GAA to allow supporters to attend fixtures at HQ. Horan also suggested up to 42,000 fans could click through the Croke Park turnstiles later in the year, roughly half its 82,300 capacity, if the Government were to reduce social distancing from two metres to one metre.

Speaking to Na Fianna GAA TV, Horan said: “We’ve already worked it out that if the Government allow larger crowds to gather, over the 5,000 that they currently have, we could probably put 21,000 into Croke Park safely, Horan told his club Na Fianna GAA TV.

“The operations team in Croke Park have mapped it out. It would cause practicalities in terms of there’d be an element of lottery for tickets. Premium ticket holders would probably have to get a credit into the following year and just do a lottery on the tickets that are actually there available for games going forward.

“Until social distancing is scaled back, we just won’t be able to pack Croke Park, it is our intention to get it open and get it going once the inter-county games start. If it goes back to one metre, we’ll be able to double the attendance to 42,000.”

On that matter McGill said: “Today [Monday] is June 8th, and right now the inter-county programme is scheduled to begin on October 17th. Given how fast things have moved in the last few weeks, I’ve no idea what the environment will be like by then. It’s still over four months away

“Once it’s been confirmed that the country is ready to move on from Phase 3, that’s when we can begin looking at and announcing fixtures. There no point in doing so in the meantime. The CCCC will be meeting in the new few weeks, but it will take more than one meeting. Now that we have a rough idea of the timeline we can begin the discussions anyway, but nothing will be decided until after Phase 3.”

There were also reports over the weekend that England Rugby Union plans to lobby the UK government to reduce physical distancing from two to one metre, would be replicated here by the IRFU. Britain is one of the few countries – Spain and Ireland are others – to insist on two metres as part of the measures to stop the spread of the virus. However, McGill confirmed that matter has yet to be considered by the GAA.

However Dr Kevin Moran of the advisory group stated categorically that there could be no return to full training were two metres is still the standard for social distancing; he then qualified this by saying that he hoped players could “progress” to contact training.

GAA pitches still won’t reopen until June 29th when small group training of up to 10 players will be allowed; full contact training for clubs outdoors can start on July 20th, with games from Friday, July 31st.

This club window is to last 11 weeks, ending on October 11th. Inter-county training can only resume on September 14th, before the championship starts October 17th at the earliest.

“It should be exciting though, when it does start,” said McGill. “And it will be different anyway and hopefully for this one year only.”

Inspirational Burke points the way as Dublin clear opening hurdle 16:35
A changing of the seasons as Minella Indo lines up at Wexford 15:40
Lewis Hamilton makes history in Portugal with 92nd GP win 15:45
Celtic slip up again as Aberdeen strike late in pulsating draw 14:40
GAA discourages the use of team buses when travelling to matches 11:25