With two months already gone can pitches really remain empty for another two? 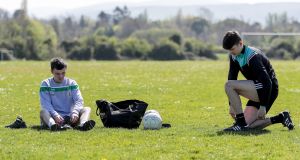 In the park up the end of our street, more or less every day of the lockdown has had some version of the same scene play out. Living in Dublin, a lot of the corporation parks have goalposts for soccer and GAA and ours is no different. So despite the fact that the GAA have locked the gates from Malin to Mizen, I only have to walk 200 yards to see players in boots and bibs sweating through shooting drills, jinking around cones and hopping off tackle bags along the way.

These aren’t mass events but they’re not nothing either. The biggest group I’ve seen has been a coach and three players on a scorching afternoon about a fortnight ago. By the lockdown rules of the day, they were probably colouring outside the lines but it was hard to find the harm in it. A couple of gardaí went around the perimeter of the park on horseback and didn’t bat an eyelid. Neither did the horses, come to that.

Anecdotally, this is something that is happening all over the country. Sport is being played. Not in matches, certainly. But in fits and starts. Half-organised, half-not. Eyes are being kept in. Touch is being maintained. Sport isn’t something that has been locked away in a strong box, waiting to be released only when the crisis has passed. It’s too vital to people.

And here’s the thing. All the while, the curve is being flattened, as intended. “We have effectively extinguished the virus from the community,” said Tony Holohan last week. Holohan’s deputy, Ronan Glynn, says that there are now fewer than 2,000 cases in the country. On only one of the last 10 days has the number of confirmed new cases strayed above 100. All the important numbers are trending downwards – daily deaths, ICU admissions and, most crucially, the R number that measures infections.

This happened while flash fires of sport were breaking out in parks all over the country. People weren’t scrumming down or getting touch-tight or tackling with the near hand but that’s not the point. The point is that people were doing a bit. And while they were doing it, the virus was being beaten down.

No sport, no nothing, not for the longest time. And that was absolutely fine. It was easy to suck it up

Correlation is not causation, obviously enough. The nationwide abandonment of workplaces, the virtual cessation of commuting, the quiet death of socialising – these are the things that have done the heavy lifting in keeping people apart. It’s hard to imagine that closing golf clubs for over two months did much by the way of slowing transmission of the virus but for the sake of social solidarity, it’s easy to see why it had to happen.

But now golf is back. And tennis is back. And cycling and athletics and rowing and sailing and open water swimming and all the rest of it. And a fortnight from now, sports teams everywhere will officially be allowed to train in small groups on their own grounds. Racing will get going again. On television, the big football leagues are clanking into gear, the PGA Tour is down for a return in the second week of June and the IRFU have a date circled in the calendar for the interpros. Everything gathers its own momentum.

For the authorities, that momentum is impossible to obstruct. If there is downside to their good news, this is it. Six weeks ago, it was easier for people to accept every gloomy prognostication about what lay ahead. The numbers on the nightly news were appalling. There was no sense of what the end would look like, not to mind where it might be.

On the ground, if you had a friend or a family member working on the frontline, the numbers weren’t an abstract thing. All you had to do was ask how work was going. The answer was always stark and often haunting. It made thinking about the road ahead very simple. No sport, no nothing, not for the longest time. And that was absolutely fine. It was easy to suck it up.

Now that the news is apparently good – or at least less bad – keeping a lid on everyone’s urges is a trickier task. If there’s fewer than 2,000 cases in the country and the majority of them are in the cities, it gets harder and harder to tell people why they can’t do something they see as not just harmless but good for them. Especially in rural areas.

In that landscape, the GAA’s decision to order all club grounds to stay shut until July 20th at the earliest looks increasingly untenable. While clearly well-intentioned, it’s going to look like taking a sledgehammer to crack a nut soon enough if everything keeps going in the right direction.

Think about it – it’s two months ago yesterday (Sunday) since the lockdown was announced by the government. Never has there been a longer two months in any of our lives. Now let’s say you’re living in a rural village in Kerry or Mayo or Donegal or wherever. Is it really possible to imagine going another two months through the best of the weather without being allowed set foot on the local pitch?

People aren’t going to take it. The GAA knows this, of course, which is why they knew to accompany the shutdown order with the suspension of the Player Injuries Benefit Scheme. Nothing focuses the mind of a club chairman like the threat of not being insured if somebody comes to mischief on your property.

But even so, you’d have to imagine that the groundswell will change minds in Croke Park sooner rather than later. Every conversation you have with a GAA player or manager or official now includes a moan at the plight of members who are being deprived access to The Field. At a time when the headline news seems to be going broadly to plan, it looks wilful on the GAA’s part to shut themselves down unilaterally. Especially when their members are making do in parks and green spaces across the land.

The year might not be done yet after all.