Kerry footballer reveals racist abuse he has received on the pitch

‘People ask me, ‘what are you doing in this country? Why are you playing this sport?’ 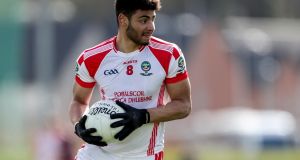 A 19-year-old footballer from Kerry has spoken about the racist abuse he has received while playing Gaelic football.

Franz Sauerland plays for West Kerry side An Ghaeltacht, and in 2018 he captained Dingle’s Pobalscoil Chorca Dhuibhne to the Corn Uí Mhuirí as well as playing at midfield for the Kerry Under-17 team a year earlier.

Sauerland’s mother was born in Ghana and his father is German.

A fluent gaeilgeoir, Sauerland told video journalist Seán Mac an tSíthigh in an interview released on Twitter: “People ask me, ‘what are you doing in this country? Why are you playing this sport? Go back to your own country’. The worst insult I ever heard was ‘go back to your cotton fields’. That upset me.

An Ghaeltacht footballer Franz Sauerland outlines some of the racist abuse he has suffered. It's shocking to hear this happens regularly. Franz is a wonderful role model & our parish is very proud of him.
He will be joining a Black Lives Matter protest, Dingle at 2pm @NuachtTG4 pic.twitter.com/g2pPMcKlNt

“I just feel it’s completely wrong. It upsets me when I hear those things. But I have fantastic teammates who stand up for me and support me whenever it happens.”

Former Kerry and An Ghaeltacht player Dara Ó Cinnéide told The Irish Times the youngster has always excelled on and off the field: “Franz is a pure gentle giant. He gets great support from the lads in the dressing room and it’s something he wanted to talk about with everything that’s happening at the moment and he’s dead right. There was a Black Lives Matter protest in Dingle today with over 500 at it and he wanted to talk before that.

“He said in a radio interview with me how he felt he always had to work twice as hard as everyone else growing up. But he’s born and bred here and he’s as Kerry as they come. He’s an older brother who plays too and we are very proud to have two lads of German and Ghanaian extraction and a Guatemalan on the team and they are great personalities. They’re just the lads, they’re very popular and we are very proud of them .”

After the Hogan Cup semi-final in early 2019, his Pobalscoil Chorca Dhuibhne school lodged a formal complaint with Croke Park authorities following allegations of racial abuse from a group of supporters. The team were managed by former Kerry manager and captain Eamonn Fitzmaurice who is also the principal at the school, he said at the time: “it crossed the line. As a school community we feel very strongly about it.