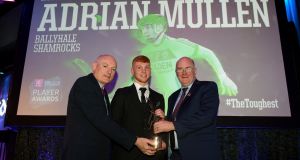 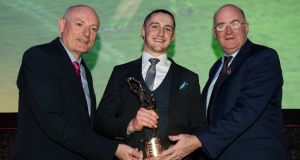 Corofin’s Kieran Molloy and Ballyhale Shamrock’s Adrian Mullen were named as the overall footballer and hurler of the year at the GAA club players’ awards held at Croke Park on Saturday night.

Molloy was a thorn in the side of every opponent as his marauding runs were a feature of the Galway club’s march to what was impressive back-to-back All-Ireland club football titles.

The flying wing back was earlier unveiled as one of seven Corofin players on the overall best 15 of the provincial and All-Ireland stage of the club championship.

The latest find in the club that produced the iconic Fennelly family as well as Henry Shefflin and TJ Reid, Adrian Mullen’s progress has already been tracked through his performances as a Kilkenny minor and his success with St Kieran’s College at All-Ireland level.

He established himself as a stylish half forward on the Ballyhale Shamrocks senior team in their successful run to the Leinster and All-Ireland club titles.