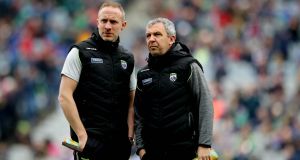 “We were still tipping away in the second half but then goals came at critical times,” said Peter Keane, leaning forward in his seat and reflecting on the sobering end to Kerry’s hectic league.

“And I suppose at the end we were unlucky we didn’t poke a goal ourselves at the death.”

Indeed. You got the feeling that Keane can live with this one. We saw just fragments of the finished article here: high summer with David Clifford in fifth gear, with Paul Geaney and James O’Donoghue firing on all cylinders, with Tommy Walsh as a renewed threat: enough to know that Kerry have the stuff up front to worry the best. This young crew has won plenty: maybe the tonic of a national final defeat against a weather-beaten Mayo crew mightn’t be the worst of outcomes in the long run.

“You might think I am mad here after losing a league final but I am going down the road relatively happy,” Keane said.

“We played eight games and a lot of things went our way. What have we lost? We lost one game in Tralee by two points. We lost a game here by two scores. A game we could have stolen in the end. D’you know…I can’t say I’m disappointed. Don’t take that up wrong. We came here to win the game. But you look at it and say: we’ve had a good league.”

The one nagging worry for Kerry is that this defeat extends a worrying trend of not winning in their old playground on Jones’ Road. And while this league win was built on defensive solidity, there was something ominous about the way that Mayo ripped through for three second half goals. James Horan would reveal that Mayo felt there were goals for the taking in the first half too, had Mayo been crisp and ruthless enough to go for them. Mayo trailed 2-3 to 0-5 at the break: nothing insurmountable to them.

“Throughout the league we’ve been building on every game and after every game we reflected on the next day,” said winning captain Diarmuid O’Connor.

“Today was no different – we just looked at it as round eight rather than a final or as a big occasion and saw what we had to improve on and I think we did that mostly in the second half today. In the first half we made a few mistakes but we tweaked them. It was more frustration that we weren’t executing our own game plan as well as we could. We did a few things right but basic errors were letting us down – hand passes and kick passes going astray. We just talked about two or three clear areas we needed to get right – they were probably winning their own kick out a bit too handily in the first half and winning it too far up the pitch and yeah, I think we did well on them in the second half.”

James Horan also looked at Mayo’s shortcomings for the two first half goals that Kerry manufactured.

“The goals we gave away were very slack. They were from kick-outs if I remember correctly. We didn’t press very well. Their midfield was very strong, I thought, pace wise. So they opened us for those goals. But we had four goal chances in that first half, I thought, and didn’t go for any of them. So we knew there were goals in that game for us and thankfully in the second half we got them.”

James Carr, from junior club Ardagh was one of Horan’s bolder selections and it paid off – “He is electric when he gets the ball and has a confidence when he gets the ball in his hand,” the manager said. With players like Cillian O’Connor and Tom Parsons returning to full fitness, it has been a hugely encouraging start to his second term in charge.

“There are certain things we are going after in our play this year,” Horan declared.

“Just five or six fairly basic things that we have gone after and we are monitoring those very closely in each game this year. If we get those we are fairly happy regardless of the result. So we were good on some of those today. Our finishing and our effective attacks are huge areas for us to improve on. We want to get out and play like we can. We have shown it in pieces in some of the games – against Tyrone we did well, even the first 10 minutes against Galway, against Kerry in patches. So we are trying to extend the amount of time we can play that game.”