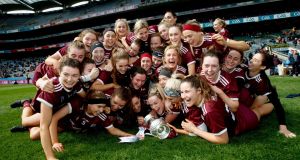 Galway served a notice of intent for the summer with a first national title since 2015 by surviving a determined Kilkenny comeback in the Littlewoods Ireland Camogie League Division One Final.

In the process, the Maroons were ending the dominance in the spring competition of the Noresiders, who were bidding to claim the title for the fourth consecutive season.

The champions had no answer to the unrelenting challengers, particularly in the first half, though they displayed all their renowned grit in the second half when launching a determined comeback bid.

Their 0-10 to 0-4 interval lead was built not just on the scoring of midfielder Aoife Donohue (0-3), Niamh Kilkenny (0-2) and freetaker Carrie Dolan (0-4), but also the platform provided by the obduracy of a defensive unit in which Shauna Healy was imperious.

Second half goals from Michelle Quilty and Anne Dalton brought Kilkenny to within a point of Galway with 13 minutes of normal time and what turned out to be around six of injury time still remaining.

The westerners were not to be denied however, Healy, Sarah Dervan and Emma Helebert among those commanding the trenches.

Dolan held her nerve brilliantly to convert two frees, having missed a couple earlier, and by the end, Galway looked confident and comfortable en route to a merited success.

Yet the start was far from promising. Katie Power struck a prodigious point with both feet off the ground after good work by Denise Gaule and Danielle Morrissey in the third minute, and within seconds, Anne Dalton was bearing down on goal with only Sarah Healy to beat.

The reigning player of the year attempted to slot the sliotar into the corner of the net but to the amazement of everyone and her own disgust, dragged her shot inches wide.

It was a massive let-off for Galway and they capitalised, shooting the next seven points and exposing a number of gaps in a Kilkenny defence devoid of Grace Walsh and Edwina Keane, and the powerful screen that joint captain Meighan Farrell would normally provide.

Donohue made hay from deep, with one score symptomatic of Galway’s combination of industry and ability, as she forced a turnover before racing onto the break, lifted without recourse to catching, soloed forward and then finished sumptuously.

It rivalled Niamh Kilkenny’s gorgeous pirouette out of a ruck and crisp finish for the score of the half.

The Cats did steady the ship however, converted frees by Morrissey (two) and Gaule (one) keeping them in contention with the wind at their backs in the second half.

Though it was Galway that resumed on the front foot via points from Dolan (free) and Ailish O’Reilly, who was now at full-forward, Kilkenny were beginning to link up better in attack.

After Morrissey and Dolan exchanged points from frees, Morrissey set up Power for her second score and then, ace goalpoacher Quilty finished after Dalton drew five defenders before placing her teammate.

Quilty followed with a free but Niamh Hanniffy responded with a wondrous score, gathering possession tight to the left on the 45 and embarking on a typically direct run before cutting inside and drilling over.

When Dalton fired first time off the sod to the net in the 47th minute after Quilty had broken Gaule’s long delivery from a free however, the momentum now seemed with Ann Downey’s troops.

Galway showed their mental fortitude to battle back though. Healy was colossal in the fullback line and then Dolan found the mark from a placed ball having been fouled herself, minutes after missing an easier opportunity.

She repeated the trick following a foul on O’Reilly, who had dispossessed Colette Dormer to gather possession initially, and the gap was three.

Deep in injury time, Dalton careered through the middle and offloaded to Gaule, who was unceremoniously upended by Dervan to prevent what would have almost certainly been an equalising goal.

Gaule dusted herself down to take the subsequent free on the 20m line but it was deflected out for a 45. Claire Phelan’s bid to drop her subsequent delivery short was misjudged by a few metres for a point and Galway survived the last minute of Cathal Egan’s supplementary time to claim the spoils.