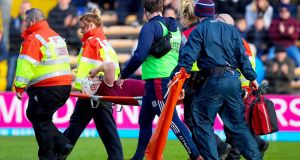 Joe Canning will be sidelined for 14 to 16 weeks with the groin injury he suffered in Galway’s league semi-final defeat to Waterford.

The 2017 Hurler of the Year will require surgery for the injury which came about after a shoulder from Kevin Moran as he opened up to strike the ball in the closing stages. Canning left the field in Nowlan Park last Sunday on a stretcher.

The Portumna club man will likely be sidelined until mid July, ruling him out of the entire Leinster championship.

On Saturday morning Galway GAA hit out at a number of media outlets who they claim published reports on Canning’s fitness that were “entirely incorrect and were at no point checked with the Galway team management or medical team”.

They released the below statement to correct this:

“On Sunday March 24th, Joe Canning injured his groin in the Allianz national hurling league semi-final against Waterford. The injury will require surgery and there is an expected recovery period of between 14 to 16 weeks.

“On March 17th, Fintan Burke damaged his cruciate knee ligaments in the AIB All-Ireland club hurling final playing for his club St Thomas. The injury will require surgery and Fintan will not be available to play for the remainder of the 2019 season.

“Galway GAA wish both Joe and Fintan all the best in their recoveries and will be providing them with all the necessary medical supports to aid them.

“Speaking today, Galway senior hurling manager Micheál Donoghue said “I, and all the team wish Joe and Fintan a speedy recovery from their injuries. They were both very unlucky to pick up injuries at this stage in the season.

“Even by his own high standards, Joe Canning’s performances this year have been exceptional. He is in good spirits and has a positive mindset facing surgery and rehab period.”

“Fintan Burke is an exceptional young talent and his injury is a difficult blow in what was shaping up to be a great season for him. He was outstanding in St Thomas’ run to the All-Ireland hurling club final and is determined to get back playing for his club and Galway.”

“I, our medical and support team will be working with Joe and Fintan closely to help with their recoveries and return to the squad.”