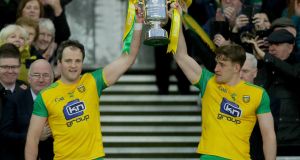 The victory we all perhaps expected as Donegal made off with the Allianz Division Two league title - yet the manner of it was anything but straightforward.

Trailing by eight points after just 13 minutes of Croke Park action, Donegal must have wondered just how much Meath had been offended by their round two defeat to the Ulster champions.

Meath coughed up a four-point lead on that occasion to lose by two - their only defeat in the group campaign - and despite a great start here ultimately they failed to hammer home their authority again.

By full-time, a 10-point scoring swing had occurred with Donegal, superbly led by Michael Murphy, dominating the second-half to add another piece of silverware to their collection.

It brought bad memories back for Meath fans - in the 23,644 crowd - of their Leinster championship defeat to Westmeath at the same ground in 2015 when they let slip an eight-point half-time lead.

This loss won’t cut so deeply, for all sorts of reasons, but it will raise the old issue all the same of whether or not this group of Meath players can get the job done when they have teams by the throat.

Meath’s Mickey Newman was virtually unstoppable in the opening period and scored two points before claiming a high catch and beginning the move that led to Thomas O’Reilly’s 11th minute goal.

Newman still had his moments and winced as, firstly, a point and then a goal that he scored were chalked off, by Hawk-Eye and then by the referee for a square ball infringement.

Meath still led 1-10 to 0-8 at half-time but they turned to face the wind in the second-half and failed to kick on, registering just five more points and only one from open play.

Donegal, in turn, showed all their quality and experience to reel Meath in with a series of well taken scores from the likes of Oisin Gallen, Jason McGee and Murphy before Jamie Brennan slammed in a 58th minute goal.

That put Donegal 1-16 to 1-14 ahead and they held on for the win with Meath reduced to 14 late on when defender Shane Gallagher was dismissed following a black card on top of an earlier booking.