John Maughan happy to ride some luck with Offaly

After wins over London and Sligo, Faithful manager is looking forward to Laois test 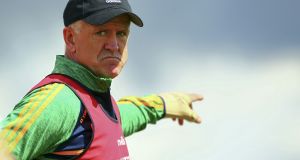 John Maughan: “I honestly thought Derry would win that game, I was wrong, and Laois have moved on as well. I don’t expect there will be much between us.”  Photograph: Ken Sutton/Inpho

John Maughan has been around long enough to know that luck is no fruit tree, not always gentle or fair, so he’s happy to take his pick of it right now.

In his first season as Offaly football manager, and 30 years after taking up his first assignment with Clare, Maughan also knows his team were a little unlucky not to beat Meath in their Leinster first round tie, losing by two points after leading by four going into the last 10 minutes.

After that Offaly drew London and then Sligo in the qualifiers, both at home, winning the latter at O’Connor Park last Sunday by 11 points, reaching the third round of the qualifiers for the first time since 2010, when they lost to Down.

In the round three draw on Monday, they drew neighbours Laois, lucky to avoid the likes of Mayo, Armagh and Tyrone – only a little unlucky not to have home advantage.

Westmeath came out first, followed by Laois, but because repeat pairings couldn’t happen, Laois were moved across into the next slot (the home game for the fourth fixture). Then the next team was drawn to play Westmeath, which was Clare, and Westmeath kept that home advantage. Then in the final fixture, Offaly were the last team drawn, away to Laois.

“Look, the draw was kind to us in the first two rounds,” says Maughan, “and no disrespect whatsoever to the opposition, but two Division Four sides now, Sligo going down from Division Three, London at home as well, that certainly helped.

“We got bumped around a little in Monday’s draw, and it would have been nice to have another home game, but nonetheless Portlaoise is only up the road, we won’t have to overnight, it’s fine, we’ll take it. We avoided the big guns, and I was very much aware the Ulster teams that were lurking there, Mayo too, and at this juncture avoiding them is a help.

“And I would certainly agree the Meath game was one we should have won. There was a little bit of inexperience maybe, four points up with 10 minutes to go, and I though no way would we lose, but we still took a lot out of it, great confidence, and I could tell them straight that they proved themselves against Meath, a team going up to Division One. We go a bounce out of that. And same with London, and Sligo on Sunday, scoring 3-17 in any championship match is good going.”

Maughan’s management journey after Clare, after guiding them to an historic Munster title in 1992, has taken him to Mayo, twice, and Fermanagh and Roscommon, and so far everything about being in Offaly has reminded why he loved football management in the first place.

“I’ve said before I never once thought I’d get back into inter-county management, had fallen into a bit of a comfort zone maybe, but this has certainly got me out of that, and I’m enjoying it.”

“We’ve a wonderful backroom team, the role of manager has changed incredibly over the last 30 years. It was 1990 when I got involved, and the manager nearly had to drive the bus as well in those days. That’s all changed now, and I’ve lads doing a lot of the heavy lifting for me now, video analysis, strength and conditioning.

“Eddie Fleming and Vinny Claffey, it was they who first encouraged me to come to Offaly, and I’m certainly delighted with the response. It’s a pleasure to work in, and the commitment is there same as any other team. And I’m lucky in that I went to school in the midlands, in Moate, and understand their dynamic a little. We know we’re still a Division Three team, and the plan is to keep improving, and I do love being a part of it, enjoy the company.”

Offaly lost to Laois by just three points in the league, Laois later gaining promotion to Division Two, and Saturday in Portlaoise promises to be a similarly close affair.

“They’re coming in on the bounce, an impressive win over Derry, in Derry. I honestly thought Derry would win that game, I was wrong, and Laois have moved on as well. I don’t expect there will be much between us.”

The winner will also be just one game away from the prize of a place in the Super-8s.

“Look, we’d consider it huge progress if we get through Saturday, we’re quite pleased with the draw, let’s see that happens.”

What Maughan does feel needs some change in not just luck is the championship structure.

“The beauty about any championship is the uncertainty, and that’s not in Leinster anymore, Dublin have stole a march on everyone, they’ve got enormous depth and quality, and appear to be just toying with teams.

“So I think that is a conversation we need to have on another day, review the situation, even if the provincial championship is still revered by many. That seems to be the theme around the place at the moment.”