Unfamiliar Armagh will pose an obvious challenge to Mayo 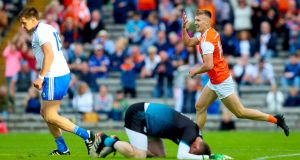 Armagh’s Rian O’Neill celbrates scoring a goal against Monaghan in the All-Ireland round two qualifier at Clones. Photograph: Tommy Dickson/Inpho

Clearly their first and last meeting, 69 years ago, isn’t very much to go on, although Mayo won’t be in for too many surprises when they host Armagh in Saturday’s round three football qualifier at Castlebar. In fact they should know exactly what to expect.

In their four games so far this summer – including extra-time twice and a replay – Armagh have racked up 5-65, including the 2-17 they hit in Clones last Saturday evening to knock out last year’s beaten All-Ireland semi-finalists Monaghan.

Of that 2-14 came from play, and better still from a spread of 13 different scorers, from corner backs Mark Shields and Paul Hughes, to all six starting forwards, including the 2-1 from full forward Rian O’Neill.

Indeed at the point in the evening O’Neill was the second highest scorer in the 2019 football championship, bringing his four-game tally to 2-19. He was eclipsed by Kildare’s Adam Tyrrell, who in their qualifier win over Antrim brought his five-game tally to 1-26, before Dublin’s Cormac Costello also extended his three-game tally out to 1-24, in the Leinster final win over Meath.

Armagh’s only other championship meeting with Mayo, back in the 1950 All-Ireland semi-final in Croke Park, ended in defeat, 3-9 to 0-6, Mayo going on to beat Louth in that year’s final; Mayo won again the following year, that being their last title since.

They’ll be doing very well to hold Armagh to anything like 0-6 on Saturday, especially with O’Neill in the form that he is. Armagh manager Kieran McGeeney has, for whatever reason, being politely declining any post-match interviews this season, leaving that responsibility to his assistant manager and Armagh coach Jim McCorry.

They are close however, McCorry first bringing McGeeney into the Armagh senior team when he co-managed the county in the 1990s, along with the late John Morrison. Now 30 years in coaching, McCorry joined McGeeney’s backroom team in 2018, having managed Down for a single season, and the Lurgan native reckoned Armagh’s high scoring rate is something they now expect.

“The players have known that that is the type of performance that they have in them,” said McCorry. “Our scoring ratio was really high compared to previous games. Even though we scored high in other games we missed a lot, but we didn’t miss as much and we see that in training as well.”

McCorry could have been talking about any of Armagh’s starting forwards, including more seasoned players such as Jamie Clarke and Stefan Campbell, only O’Neill’s impact in his first senior season is the most conspicuous. His first goal on 48 minutes was deftly fired into the net after Rory Beggan’s initial save; his second 10 minutes later was coolly finished after Clarke found him in open space.

There should no surprise in this either, O’Neill already tipped for big things since 2018 after helping his club Crossmaglen win back the Armagh title after a two-year absence. Just turned 21, O’Neill is a nephew of former Crossmaglen and Armagh star Oisín McConville.

Tall, rangy, versatile and with a notable turn of pace, O’Neill also hinted at what’s to come when scoring four points in Armagh’s Ulster Under-20 final defeat to Derry last summer. Older brother Oisín O’Neill has also been on the Armagh panel the last three years, injury delaying his progress, though both brothers have been earmarked for success by the likes of former Armagh and Crossmaglen manager Joe Kernan.

Armagh’s high scoring rate has occasionally dried up, but there was no evidence of that against Monaghan. McGeeney was also seeking only his second ever win against Ulster opposition, in his now five seasons as manager. Since taking over as Armagh manager in 2015 he has overseen defeat in each of their previous four quarter-final ties, before beating Down after extra-time this year, despite letting slip a five-point lead with four minutes remaining.

“The important thing for us is that when we had a lead this time we couldn’t have all youse writing again about how we couldn’t close games out,” added McCorry. “That was getting a bit boring, but it was true, because we hadn’t been closing games out that we should have done. So it is important that we did that.”

Mayo will know to expect that too.