Dark night for Meath folk who remember the glory days

‘We have to try everything we can to close gap,’ says Andy McEntee after defeat 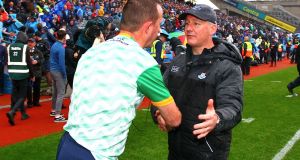 Once upon a time Hill 16 inhabitants would be crammed in, bracing themselves for the Meath invasion. Those days are distant memories now and the GAA is poorer for such reality.

Afterwards, Dublin players paraded the Delaney Cup to roughly the same number of people remaining on the sodden terrace that exists in their backroom.

So finishes the decade with the Leinster football championship in ruin as any sense of competitiveness is lost. An era that begun with Meath thumping Dublin to the tune of 5-9 to 0-13 in this very fixture concludes with no provincial rivalry to speak about.

Long gone is the mere sight of Meath green making Dubs shudder and whisper about ferocious neighbours out past Balbriggan.

Nine provincial titles in a row, or 14 from 15 summers, does nobody any good. Not Dublin. Not this shattered provincial system. Certainly not the Royals.

More impenetrable than ever, Jim Gavin fielded a similar question.

“Go down to that Dublin dressing room and you’ll see how much it means to them,” began his often-heard answer.

“There is a great tradition of Gaelic games in Meath,” he concluded. “I’m sure both sets of players will have turned up today and been very proud of what they gave. Meath will have a lot to say in this championship yet. That’s for sure.”

There is little evidence to support this idea but Gavin was not finished: “To be honest, it’s like [these Dublin players] first win in the Leinster final.”

How can the ninth title in a row mean as much as the first? This query went unasked perhaps because reporters have grown weary of predictable responses.

The fault lies not with Gavin. Here lies the Leinster football championship. The sight of a once vicious rivalry surviving on life support is the GAA’s primetime product on the third weekend of June in 2019.

For 32 minutes it looked like Meath could be held scoreless. So inaccurate was their shooting and so small in stature was James Conlon in the inside forward line – Mick Fitzsimons gobbled him whole – that it seemed like they never had any ideas to begin with.

Dublin cannot even claim to have played well. Their top scorer, Dean Rock, hit 0-4 in an 18-minute cameo. In fact, nobody pointed in the opening 11 minutes of this sorry excuse for a contest. Eventually Ciarán Kilkenny exposed a dodgy Andrew Colgan kick out and bounced off Shane Gallagher to raise the white flag.

In Meath’s defence, their fullback line were diligent and disciplined until Conor McGill – who had a fine game – saw yellow for putting Cormac Costello on his hind.

This was the height of the physical exchanges (it should be noted that Dublin did not escape unharmed as James McCarthy was forced off with a damaged right knee). Meath gathered six yellow cards to the champions’ zero but McEntee refused to moan.

“Ah but Dublin aren’t physical so it doesn’t matter.”

Dark night for Meath folk who remember the glory days. On 40 minutes the anguish was written all over Graham Reilly’s face. He didn’t want to leave the field, and said as much to McEntee, but the veteran had kicked five wides.

“I’d like to congratulate Meath on a fine game of football,” said Stephen Cluxton from the Hogan podium.

The Dublin captain, on his 101st championship outing, delivered the words in all seriousness.

“We know you are a great football team. We’ve a lot of respect for you. Just keep going.”

Where Cluxton wants them to go under the current system or how they can regain two decades of lost ground remains unknown.

The Super 8s cannot come quick enough for Gavin and company. On this evidence Meath will only weaken the whole experiment while Dublin need more than Connacht champions Roscommon to test their appetite for five in a row.

Neither manager will have learned much.

“It didn’t surprise me,” McEntee added. “They are what they are. Everyone knows what they are. The gap is there. There is no hiding from it. We have to try everything we can to close it.”

The definition of insanity is to keep repeating the same mistakes over and over again. This game used to guarantee double the crowd. Even in the rain they came and stayed. No more.