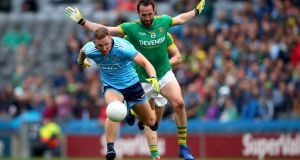 Here lies a Leinster final and provincial football championship in all but name. A decade of the Dubs. A new record of nine provincial titles to Meath’s flicker in 2010.

Easily the most entertaining moment during Dublin’s uncompetitive dismantling of Andy McEntee’s Meath was the half-time music. Lady Gaga (not in person) booming out how, “We are far from the shallows now” and how everyone is “Longin’ for change,” seemed almost comical.

But the sight of this a once vicious rivalry surviving on life support was far from funny.

At one point it looked like Meath could be nilled. So inaccurate was their shooting and so small in stature was James Conlon in the inside forward line - Mick Fitzsimons gobbled him whole - that they never ran out of options; they never had any to begin with.

This is the GAA’s primetime product in June 2019.

Dublin cannot even claim to have played well. In fact, nobody could score in the opening 11 minutes. Eventually Ciarán Kilkenny exposed a dodgy Andrew Colgan kick out and bounced off Shane Gallagher’s attempted body check to raise the first white flag.

In Meath’s defence, the fullback line were diligent and disciplined until Conor McGill - who had a fine game - saw yellow for putting Cormac Costello to ground.

This was the height of the physical exchanges (It should be noted that Dublin did not escape unharmed as James McCarthy was forced off after being unable to put weight on his right leg).

Jack McCaffrey made it 0-2 within seconds of Kilkenny’s opener. There are certainties about this Dublin outfit. Work rate. Power. Sensible use of possession. And, leaving McCaffrey in a one versus one scenario will result in scores. Ben Brennan was duly skinned alive.

Dark night for Meath folk who remember glory days. On 40 minutes the anguish was written all over Graham Reilly’s face. He didn’t want to leave this exhibition-paced contest and said as much to McEntee but the veteran had posted five wides.

This was no relation of high octane sport. None at all.

Paul Mannion kicked a serious score before the interval but the Dublin forwards could hardly be commended for their overall quality. Mannion smacked the butt of the post on 25 minutes after Kilkenny’s hand pass had Con O’Callaghan racing down on goal.

Penalty missed, the 42,027 attendance barely reacted, such was the overwhelming feeling of inevitability.

The Super 8’s cannot come quick enough for Jim Gavin and Co. On this evidence Meath will only weaken the whole experiment of improving the football championship. Gavin’s team need more than Connacht champions Roscommon to test their appetite for five-in-a-row.

Neither manager will have learned much from this encounter. Up went Stephen Cluxton to collect Dublin’s 58th Leinster title. Nine-in-a-row, clearly, is a statistic that emphasises the shattered state of this provincial competition rather than Dublin’s greatest ever era.

“Keep going,” was all Cluxton would tell the Meath players.

So finishes a decade that began with Meath thumping Dublin to the tune of 5-9 to 0-13 in this very fixture. Nine cold seasons have passed with no real Leinster rivalries to speak of.

Gone are the days when the very sight of Meath green would make inhabitants of Hill 16 shudder. It took them 55 minutes to find their voice. The stadium eventually finding full voice with O’Callaghan’’s late and expertly finished goal.

Something to cheer, nothing more.

By the end all that resonated was Gaga’s words: “Tell me something,

boy: Aren’t you tired tryin’ to fill that void? Or do you need more?”

Surely, this cannot go on. The marvel is so many people keep showing up. Then again, Dublin versus Sean Boylan’s Meath used to guarantee double the crowd.