Vagaries of the draw bring home comforts for Laois 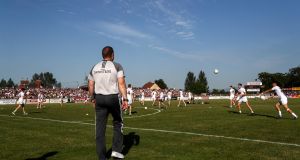 Kildare will be back in Newbridge for their meeting with Tyrone.

Some loose talk of conspiracy theories occasionally follows a football qualifier draw but there was nothing new or unusual about what transpired in the RTÉ Radio studios on Monday morning. At least not that we know of.

The eight winners from round two were drawn against each other for round three with two only provisions: the first team drawn would have home advantage (unless a Division Three /Four team from the current year’s league is drawn against a Division One/Two), and the draw was also subject to avoidance of repeat pairings, where feasible.

Repeat pairings were permitted in the opening two rounds, and as it transpired the only two teams who had already played each other in the round three draw, Westmeath and Laois, who met in the Leinster quarter-final, were initially paired together; as a result Laois went from losing home advantage to gaining it.

“There was no change this year, in saying a repeat pairing was allowed before,” explained Feargal McGill, the GAA’s director of player, club and games administration. “Not at this stage. This has been the case for the last number of years.

“What happened was Westmeath came out first, followed by Laois, but because that fixture couldn’t happen, Laois were moved across into the next slot, which was the home game for the fourth fixture. Then the next team was drawn to play Westmeath, which was Clare, and Westmeath kept that home advantage. Then in the final fixture, Offaly were the last team drawn, away to Laois.

“That was in the fixture regulation, that where two teams are drawn together who have met before, the second team goes into the next slot. There could be some confusion about that, but that has always been the case.”

In 2014, a new qualifier format was introduced, whereby counties were divided into two groups depending on which side of the provincial championship they played on, in order to reduce the likelihood of repeat pairings; however this was done away with after 2017.

Unlike last year, there was no issue with any of the home venues - Kildare hosting Tyrone at St Conleth’s Park in Newbridge (5pm), Westmeath hosting Clare at Cusack Park in Mullingar, (6pm), Mayo hosting Armagh at MacHale Park in Castlebar (7pm) and Laois hosting Offaly at O’Moore Park in Portlaoise (7pm). Sky Sports had the option of covering two games and will be in Newbridge and Castlebar with their live pay-per-view double-header.

At this stage last year, Kildare were originally denied home advantage at Newbridge, after drawing Mayo in the third round, due to health and safety concerns at St Conleth’s Park - prompting the ‘Newbridge or nowhere’ campaign. The game was fixed for Croke Park as a double-header with Cavan-Tyrone (Kingspan Breffni Park being resurfaced), only for the GAA to reverse the decision, and fix the game for Newbridge, where Kildare subsequently beat Mayo.

“There were no issues around any of the home venues this year,” confirmed McGill. Mayo do have home advantage this time, but last year’s third round qualifiers effectively only saw two of the four home teams win; Kildare in Newbridge and Armagh over Clare in Armagh.

All round three games will again be “winner on the day” - with the provision for extra-time, then penalties, if required. The four winners from round three will then play the four provincial losers for the remaining four spots in the Super 8s, that draw taking place this coming Monday morning, July 1st, all four of those games will be played at neutral venues, including the possibility of a double-header at Croke Park, the following weekend, July 6th/7th.

It also means two of the provincial final losers (Meath, Cavan, Cork and Galway) will face the winners of either Westmeath against Clare or Offaly against Laois to reach the Super 8s; three of those four teams competed in Division Three of the 2019 league.

Meath, however, can’t be drawn against the winner of Laois and Offaly because again no repeat fixtures allowed in round four, the Royals having already played both teams on route to the Leinster final. Cavan and Armagh also can’t meet again given their quarter-final meeting in Ulster.