As officials waffle on the Leinster Championship burns to the ground 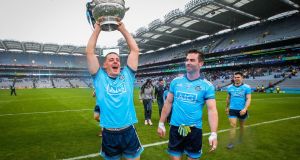 And the 2019 award for disingenuous waffling goes to….Leinster Council chairman Jim Bolger, calling on the sodden crowd at the end to put their hands together for the fiercely contested Leinster final between Dublin and Meath that had just ended.

A fiercely contested final that ended in (checks notes), oh yes… just a 16-point victory for the team winning its ninth title in a row and its 14th in the last 15 seasons. Makes you wonder how he would have described it had it actually been close.

This was fiercely contested in the way a fire fiercely contests a wooden hut. Meath didn’t go up in smoke straight away, but once the flames took hold they were ashes and dust and nothing more.

Dublin had a bad first half but still kept Meath to just a single point and missed a penalty of their own. They outscored Andy McEntee’s side by 1-12 to 0-3 after the break.

You want fiercely contested? Try the exchange between the brave soul in the Meath press pack who asked McEntee afterwards whether he would be releasing lads to play in the local hurling championship next weekend. “Are you f**king mad? What sort of a f**king question is that to ask me?” was McEntee’s reply.

Now there’s a contest where you could only stand back and admire both sides involved.The game that preceded it? Not so much.

Meath were just the latest turkeys to be shot in a Leinster final, beating the 18-point margin by which Laois had their hides tanned for them last year. The 47,027 crowd was up around 6,000 on 2018 so maybe everything is great. Bolger certainly appeared to think so, trumpeting Dublin’s achievement in being the first county to win nine Delaney Cups in a row. As if that’s a good thing for the province.

Bolger was also good enough to take time to wish the Dubs all the best of luck on their journey for the rest of the year, which might just have rung a bit hollow in the ears of the Meath players who were getting rained on down on the pitch.

Not to mention those of Laois, Kildare, Westmeath and Offaly, the other Leinster counties still in the competition. Coming on the back of blaming the low crowds at Dublin matches on the fact that Kildare have fallen away, it’s possibly not the best look for a leading Leinster Council official.

Even when they came out for the second half just 0-5 to 0-1 ahead there was zero sense in the 47,027 crowd that this was a live match. Everyone just presumed they would knuckle down and pull away, and everyone was correct.

None of this is to gainsay Dublin’s abilities or their excellence. There was a Paul Mannion point in the first half that all but took the breath away, such was its precision and degree of difficulty.

Stephen Cluxton started it with a free from the hands on his own 20-metre line. With Meath pressed up after a break in play, Cluxton was still able to mock the slippery conditions with a lasered 55-metre kick that bypassed six Meath players to find Philly McMahon in tight space at midfield.

McMahon turned and immediately rifled a one-hop kick into Mannion’s chest 30m from goal. Mannion took Seamus Lavin for a run out to the sideline and though the Meath defender couldn’t have done a lot more than he did, Mannion was still able to turn back inside and spilt the posts with his left foot, shooting from around 6m in from the Cusack Stand sideline.

In all of the general depression over what Leinster football has become, a score like that should not be diminished or undermined by anyone. Three kicks of the ball took the play from Dublin’s 20-metre line to the netting behind the Hill 16 goals and none of it was Meath’s fault. It was complete Dublin brilliance and a joy to behold.

So on they go with their five-in-a-row quest, the only speedbump to report a worrying knee injury to James McCarthy.

Meath are a game from the Super-8s, ready to meet whoever comes through the third round of the qualifiers, the draw for which takes place on Monday morning on RTÉ radio. Whoever they get it won’t burn them like this did.

Like everyone else in Leinster, they’ve long since stopped having an answer to Dublin. It must amaze them that nobody in officialdom can see it.

Ken Early: Despite coronavirus, Premier League season must be finished if at all possible 06:00
Summer tours next in line for postponement as rugby assesses options 05:00
Favourite sporting moment? It’s a bit like choosing your favourite child . . . 01:00
My favourite sporting moment: When Zidane glided through Brazil in 2006 01:00
Angling Notes: Many fisheries have closed for the foreseeable future 00:00
Crossword Get access to over 6,000 interactive crosswords