Richie Power expects Kilkenny and Wexford to be a bruiser again 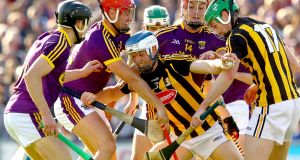 Some days Richie Power misses everything about hurling with Kilkenny, other days he doesn’t. Watching Kilkenny’s last round of the Leinster championship against Wexford found him somewhere in between.

Forced to retire in early 2016, at age 29, after a third knee operation in 10 months, Power is still a keen observer of the game, only Wexford Park last Saturday week – the teams fighting out a draw – also reminded him of how much it’s moved on.

“Of course you’d love to be involved in games like that, for the atmosphere alone,” says Power. “Then you see the hits going in, and you’re thinking, ‘would the body be able to take that?’

“Some of the hits from Liam Ryan, Matthew O’Hanlon, were phenomenal. Fair dues, no one Kilkenny player stood back, even Adrian Mullen, still only 19, he loved that part of it, thrived on it.

“It was definitely one of the most physical games I’ve seen in a long, long time. It reminded me of two proper heavyweights going toe-to-toe in the ring, no player took a step back at any stage, and hats off to both sets of players, a phenomenal game, the best I’ve seen so far this year.

“You have to be astonished though, the physicality has definitely gone up again since I’ve finished, they’re all unbelievable athletes. I do think it will be more of the same on Sunday. Your heart and head will always say Kilkenny, but I think it will come down to the wire again, will only be won in the last 10 minutes.

“I really think we’re in for more of the same, because Wexford will want to make this as physical as they can, make it a dogfight, drag Kilkenny into the trenches, and see what they have in the locker. Wexford like that kind of game, Davy Fitzgerald has this Wexford team so well-drilled, they can win games the hard way, win them ugly as well, it makes no difference to him if they win by one.”

Indeed, Sunday’s Leinster final at Croke Park is effectively a sequel to last Saturday week, Kilkenny v Wexford II. Power’s last game for Kilkenny was a telling 12-minute cameo in their four-point victory over Galway in the 2015 All-Ireland final, winning him his eighth All-Ireland, adding to his back-to-back All Stars, nine Leinster titles, and six league titles.

An ambassador for the charity GOAL, Power also retired from club hurling with Carrickshock after 2017, when they won the Intermediate All-Ireland, and played one year senior. he’s still active in other ways though, on hand to promote next month’s GOAL Mile-A-Day Challenge.

“It hit me the first year, 2016, coming to terms with it. I was forced to give up, told by the surgeon my playing days were finished, and the best he could do was get me comfortable.

“I retired at age 29, though nowadays that’s not too young, because the demands of the game have gone up again since I’ve finished. It wasn’t easy, that’s sport, you get on with it, and while I definitely have some regrets about my injuries, there’s nothing I can do about it now.

“At the moment I’m relatively pain-free, playing some golf, a lot of cycling, some coaching as well, and had to think long-term. I’m still looking at a knee replacement somewhere down the line.”

His job as accounts manager with Pallas Foods also has him covering the southeast, including Wexford, and he senses some real confidence in the county ahead of Sunday.

“Sunday might just Kilkenny better, the open spaces in Croke Park, and TJ Reid, Walter Walsh, Colin Fennelly mightn’t be as quiet as the last day, and that’s what Kilkenny will be banking on, to try spread Wexford as wide as they can, into the corners and the wings.

“But it’s a 50-50 game in my eyes, there’s been very little between the teams the last two seasons. I’ve been impressed with Kilkenny, even in losing to Galway, they fought to the bitter end, and you couldn’t have been anything but proud coming out of Nowlan Park that day. If they had another two or three minutes I think they would have drawn, because they were very much on top, and that would have pleased Brian Cody no end, despite the result.

“I think Wexford would struggle if they went back to 15-on-15, they’re so used to the system, are brilliant at playing it. And winning on Sunday would be a massive bonus to either team. I think that’s what caught Kilkenny last year, going into the quarter-final, the replay [against Galway in the Leinster final]. Win here and you’re 70 minutes from an All-Ireland final.

“Given the demands now, the less games the better. I can only imagine how sore both teams were after last Saturday week. It’s about recovery, mental recovery too, and whoever wins on Sunday will definitely be in a far better position for the rest of the championship.”

GOAL are looking for individuals to commit to running or walking a minimum of one mile a day for a month this July while raising vital funds for some of the world’s most vulnerable communities. For more see – www.goalglobal.org/events/event/goal-mile-a-day-challenge