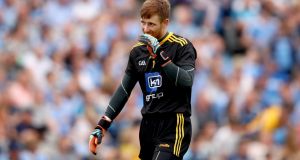 Shaun Patton: “If you are from Donegal and you don’t follow Gaelic football there’s not a lot of things left for you.” Photograph: James Crombie/Inpho

Donegal goalkeeper Shaun Patton had played the sum total of two senior games of Gaelic football before manager Declan Bonner put a call through in late 2017.

They came in the 2014 Ulster Club Championship run with St Eunan’s of Letterkenny as they met Roslea Shamrocks of Fermanagh and Tyrone champions Omagh St Enda’s. Prior to that, Patton hadn’t played a single league game or Donegal club championship.

Earlier that year, Patton featured in goals for his school St Eunan’s in the MacLarnon Cup final. In the matchday programme, his club was listed as ‘Finn Harps’ as he pursued a career in the League of Ireland. At the time of Bonner’s approach, he was in talks to possibly join Cork City.

Now, he has kept Paul Durcan – himself rated as perhaps second only to Stephen Cluxton in the earlier half of this decade – rooted to his place on the bench and has collected two Ulster football titles. Changing codes has been the best choice of his sporting career, he insists.

“There are no regrets whatsoever,” said the 23-year-old. “It was obviously a tough decision to make, but it was a decision I made with no regrets.

“It kind of became an easy decision when I saw how fickle life was in the League of Ireland. You come into this set-up and I am telling you, it’s amazing.

“Doesn’t matter what sport you are playing, there is such a drive and a passion behind Donegal football that I am just grateful to be a part of it.”

Patton’s restarts were a feature of the Ulster final win over Cavan. At times, he was faced with a blue wall of four and, on occasion, five Cavan players pushing up into the full forward line to obscure his view and deny him short kickouts.

Instead, he was able to go long and start attacks by landing the ball beyond the opposition’s 65 metre line, with the Cavan cover blown.

At Donegal, he has St Eunan’s clubmate Andy McGovern – himself a man with League of Ireland experience – as goalkeeper coach.

Asked how the two codes compare, he answers: “It’s much of a muchness. The professionalism of the whole game is crazy, it’s crazy and yet its’ fantastic to see. To see how the boys are so inspired, delighted to play for their county, their colours, it is just phenomenal.”

The one blot on his performance was a late kickout that was caught by Cavan’s Conor Moynagh who immediately launched it back towards Patton and the ball was palmed to the net, with Patton having a colourful method of describing his overall performance from kickouts.

“They were good yeah, barring the one little brain fart at the end there,” he said. “But I am not too worried about that. I am going to enjoy the night. It’s been going well so far but we have plenty of work to do yet so we have to get back to it during the week to get our heads down.”

As provincial champions, Donegal now have their first game in the Super 8s series at home in Ballybofey and will be hoping to make it out of the group, something that eluded them last year.

“Everybody is happy together, we are a tight-knit bunch. We are going to get back to the training ground during the week and get focused on getting further in the Super 8s than last year.”