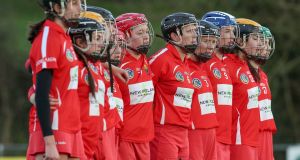 Cork’s camogie and ladies teams are facing a number of fixture clashes over the coming months. Photograph: Bryan Keane/Inpho

The eve of essential GAA, camogie and ladies football matches is upon us, ladies and gentlemen. A winter long fiesta of games that hangs quite literally on a thread, but a much-needed fiesta to boost morale, or so they say.

Sure, the club games during the summer were glorious, if you were one of the fortunate ones who could consistently watch your teams. But, and this is no disrespect to the clubs, the money maker and the big dogs are back . . . socially distant and with minimal attendees. And while the only grumblings from the men’s side is the dreaded Covid-19 results, ladies football and camogie have a potentially massive war brewing under their noses.

For context, towards the end of September, Cahir ladies football and camogie teams were faced with the first big dual dilemma to start the 2020 season. The county Junior A camogie championship final on the weekend of September 26th was postponed due to “player welfare issues”, after Cahir withdrew their camogie team as 16 of their players were involved in the senior A football final 26 hours later.

The withdrawal came after a few weeks of toing and froing between Cahir’s respective boards and the camogie and ladies football boards. The end result was not a good one. Cahir missed out on the opportunity to do another double, while the local press hammered home the lack of harmony between both associations.

So while the spotlight turned on other various obstacles like the tight turnaround window due to Covid and every other Covid/non-Covid scenario, the hope was that the situation was going to go away. Like every minor film with an obvious plot twist, the issue did not go away.

Back in March, the ladies football committees met for congress and had a vote on the addition of a new rule. The new rule stated: “The Ladies Gaelic Football Association recognises and supports the concept of a Dual Player, as defined, and will encourage all of its Units to support and facilitate its playing members of all ages, who wish to do so, to play both Ladies Gaelic Football and Camogie”.

Alas, the new rule was defeated.

The Camogie Association had the exact same rule put to them last weekend, and voted the same way. Meanwhile, the WGPA surveyed players who were almost unanimously in favour of supporting the dual player.

While the rule was incredibly vague and may not have had the desired impact due to the ambiguity and lack of definitions on how the dual player was going to be supported, it was, in writing at least, an obligation to both associations to not put dual players in an awkward position in terms of choosing one or another.

Aside from that, Cork camogie and ladies football teams made the news public that five of their players are subject to clashes practically throughout the season. Galway camogie voluntarily allowed their schedule to change.

It’s understandable why both organisations are silent on the matter. In an incredibly condensed season, both organisations are asking GAA clubs about the use of pitches. Add to that the current regulations in place due to the global crisis. And if that wasn’t bad enough, add the global crisis itself into it, and you’ve a confluence of disasters. That’s not to disregard the efforts by the dual player or disregard potential efforts being made to facilitate the dual players, this is the reality of the situation.

So, what’s going to be the conclusion? Short term it’s obvious that better negotiating from all parties is needed. Both organisations have to try to at least look like they’re finding a solution. While both organisations are tied down to renting pitches from Croke Park, it might be a lot harder to achieve.

As for the long term, it’s incredibly difficult. The obvious solution is a pride swallowing, ego-crushing merger, but if we look to the men’s games, even that wasn’t a good thing. The GAA, without having another association to bargain with, failed to protect intercounty dual stars, hence the breed being eradicated from the men’s game.

While dual players feel let down by the lack of harmony between both organisations, the time has probably come for a big decision to be made, but it’s yet to be known who’s making that decision. In an era of can’t see, can’t be, the current message to dual players is obvious: see how difficult it is for the current crop, don’t be inspired to line out in both codes. The end result is a lot of stress which may lead to a potential walkout.

1 Seán O’Brien: Anger over my parents’ break-up never left me
2 Hugo Keenan and Will Connors: The best of friends, the best of debuts
3 Ireland 50 Italy 17: Ireland player ratings
4 Unbeaten Khabib to retire after UFC 254 win over Gaethje
5 Ireland get the job done against Italy to keep alive Six Nations hopes
Real news has value SUBSCRIBE