How Justine Dupont learned to become one with the wave 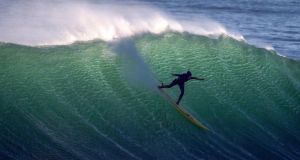 The start of the winter means warm fires, oversized hoodies and not going out into the big, lousy, freezing world until spring begins to peep through. For big wave surfer Justine Dupont however, there’s no such thing as hibernation.

“In winter it’s the start of the swells and the storms, so we are checking the forecast every day and waiting for the good conditions, the good direction of the wind, the swell, and as soon as everything is on the good situation, we go in the water.

“Most of the time we go in the water every day, and when the surf condition is not good, we rest, stretch. When it’s not good for more than a few days, we go to the gym, or we go swim in the pool to train. It’s a long season compared to other sports,” explains Dupont.

When she is in the ocean she expects the unexpected – for it is powerful and demands lots of attention and work which Justine counteracts with yoga to bring her back to a state of calm. But, like all water babies, during her time off, you’ll still find her in the ocean.

“I surf, yes sure, but I like to do different things. So actually this summer we paddled more than surfed with the paddleboard, and I can’t wait to have some good conditions to go surfing just with the fins and swim in the ocean, and for me, both are the best training.

Being one of the world’s top big wave surfers hasn’t happened by accident for Justine. In fact, she was a keen surfing and water sports lover when she was a child. Starting off in the surfers’ paradise of Lacanau in France at the age of 11 she was riding her first waves, and just four years later in 2007, she finished second at the World Longboard Championships. Not bad for a 15-year-old.

“I’m in love with nature and the ocean. It’s just crazy how one day it can be flat and sunny and warm and nice, and next day it can be rainy and windy and so much energy, and I’m just so fascinated by all of that”.

To progress through the ranks and difficulty, Justine discovered more time in the ocean would make her realise what she thrives on.

“I was doing smaller waves, and I started competing, doing lots of contests, and I was happy with changing the sport, so I was doing contests with the shortboard and then with the longboard. Two years ago I did some contests with the standard paddle, so it’s different boards, and I really liked it because it made me start surfing. Not from the beginning, but having another view of the wave, another angle, you know?

“You see the ocean from another angle. When you are swimming – you are in the wave, in the water, when you are on a stand up on the board, it’s a different angle, different view, I really like this. I feel like it’s more . . . I feel like I am more connected with the ocean and I learn more about the wave.”

Reading waves can be incredibly tricky for anyone, including people who have been in this game a long time. Add to that, the extra pressure when the waves are some of the biggest the world has ever seen. While Dupont admits this takes time, she says the most important thing to do is ask questions.

“My dad taught me at the beginning, just the first year or so, he taught me and then I was really curious, so I started asking more questions. Taking advice from others that are better than me and even just from the local beach, from the local community, I was asking a lot of questions. I was looking at what they do, I really like to learn.

“Since the beginning, I asked a lot of people, and I had some teachers, a good surfing teacher. I met a guy who was really passionate about surfing about the technical part of the surfing. We worked together for two, three years and it was really interesting.”

Onto the giant waves we’ve seen Justine take on, and selecting a good team was paramount if she was going to be safe.

“I’ve got a really good team around. Fred, my boyfriend, he’s driving the ski, and he chooses the wave then he drops me on the wave. I’ve got another friend that is doing the safety. We are three in the water, and I’ve got another person on the cliff who is doing radio communication. It’s a small team, but we need to know each other a lot, and it’s why we train a lot, and now we are really confident with each other.”

How do we know it’s a good wave, though? “I know ‘yes this wave is special’ because you can tell, you can feel. It’s even more about the feeling. You can feel like, wow, the ocean is moving in a different way and feel like there’s nothing, no noise. I think it’s more in my head that the noise is gone and I’m more focused on all my other senses.

“The sense of balance and my vision is getting really clear and yes you are – you are part the wave. You are just one with your board, with the wave and you. Just this feeling is amazing.”

Justine may not have surfed the world record wave – that belongs to Brazilian surfer Maya Gabeira – but her attitude is one all athletes, professional or not, can take on board.

“I don’t care about the record and who has the biggest wave. It’s a lot about ego. ‘Mine is bigger, I’ve got bigger’. My goal is to learn and to push my own limits, they are my real goals, and I’m really happy and proud that I beat my own record consistently every winter.

“That means that I’m getting better and so obviously I’m surfing the biggest wave, but the best thing is to learn about yourself to be able to have a good team and to be there and to make different lines on the wave because for me it’s really important to surf a wave, to draw good lines, and consistently improve year on year with yourself.”

Spoken like the authentic, determined professional that she is.