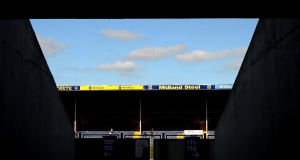 The inconvenience of it all peaked for Old Moran when it gradually became clear that the 2020 championship was in all likelihood going to go ahead. It promised weekends groaning from the burden of fixtures, which to meet the impossible demands of the scheduling were capable of neither postponement nor replay.

The idea of counties being ruled out on the spot because of their misfortunate interactions with coronavirus was sadly inevitable but he wasn’t so sure about the other stuff.

‘A small phrase with the capacity for enormous suffering,’ was how he had – pithily, he congratulated himself – summarised the postscript, ‘ET & winner on the day’.

Extra-time was bad enough in the summer but at this stage of the year! Then, potentially the misery of lads lining up for shoot-outs when either team had failed to beat the other – you could see where that was going. What if the whole business just went on and on?

Could the team that was first to collapse from exhaustion, say in the early hours of Monday morning go to the DRA and argue that the match regulations had clearly stated, ‘winner on the day’ and not ‘the day after’?

He had managed in the good weather but could just imagine being stuck out in the open on a perishing evening with hot, muffled breaths clouding up his spectacles

And while this homespun version of ‘They Shoot Horses, Don’t They?’ staggered on, Old Moran would be trapped in the two-county nightmare gazing forlornly into the bleak midwinter while bats roosted in his Amstrad laptop.

This might just appear to be needless fretting but other more obvious and intensely practical problems were easy to foresee. Firstly and perhaps most shockingly for someone who always liked to ‘stock up’ for the remainder of the week, there would apparently be no sandwiches or cakes. Seriously.

There was a story – and if true he would cheerfully have given the colleague in question ‘a piece of his mind’ – that one reporter at a county championship match had made much merriment by claiming he needed to be tested because he couldn’t taste the processed cheese sandwiches.

This was so wrong. Always one who’ll ruin it for everyone else! By and large the old catering arrangements had been splendid and would have provided a picnic on the way home, toasted sandwiches for a couple of lunches over the following days and even later, something to bargain with the rats nesting in the great coat that he hadn’t needed for championship since that time it snowed in Clones in June.

There would also be implications for his work. Scattered around otherwise empty stands at appropriate social distance would severely impact on his ability to ‘fact check’ with younger, more eagle-eyed colleagues: things like the wing back, who appears to be playing behind the front two as a ‘false 13’, or more realisitically, ‘what’s the score?’ or even given the merry-go-round of fixtures, ‘who’s playing?’.

Then there’s the masks. He had managed in the good weather but could just imagine being stuck out in the open on a perishing evening with hot, muffled breaths clouding up his spectacles.

The thought brought him back to childhood and staring in the steamed-up windows of Savage’s Home Bakery, wondering what buttery fancies he might be able to afford after collecting the deposits due on the empty porter bottles he’d gathered outside that house where a wake had been held the previous night.

This winter he will of course be assisting in the restoration of national morale, which isn’t a small thing, but at what cost to his own and how robust will all that morale prove should the wretched virus sweep through a few teams and force their withdrawal?

Might players feel queasy about having to fulfil a fixture in some county that has recently become rampantly infected?

No wonder the Chinese purportedly had a curse, ‘may you live in interesting times’. Actually, they didn’t but it added authenticity to imagine the inscrutability of the Orient being mustered in a malediction more nuanced, less direct than would be heard, say when someone shoots a wide late on at an important match.

Whenever Young Moran declared himself bored, his mother would quip, ‘well you must be very boring’. On the face of it, dull repartee but it did create the nagging apprehension that she might have a point and invariably forced his silence.

And the truth all of these years later was that he yearned for less interesting times. When winning a county title didn’t amount to the same thing as a chemical attack on some village. When a few frothy and companionable measures of ale weren’t categorised along with Russian roulette.

When he could travel at the fall of the year and bump into people he met only once in a while, shake their hands and believe (surely they couldn’t all be pretending) that they were glad to see him again, however briefly.

And what about Christmas? With little more than two months remaining, what prospect was there of seasonal warmth, the beckoning cheer of saloon bars and – bless us! – those beloved Yuletide games of ‘I seem to have lost my wallet,’ and ‘I was going to head off but sure, go on – you’re very good!’.

No, the selfsame moon that looked down on the herdsman’s shed in Bethlehem might pick him out behind the glow of floodlighting in the vast expanses of an empty Croke Park on December 19th, as Old Moran details which of two teams will win the weirdest football final in history.

Will he know it’s Christmastime at all?

1 Seán O’Brien: Anger over my parents’ break-up never left me
2 Hugo Keenan and Will Connors: The best of friends, the best of debuts
3 Ireland 50 Italy 17: Ireland player ratings
4 France warm up for Ireland with impressive win over Wales
5 Ireland get the job done against Italy to keep alive Six Nations hopes
Real news has value SUBSCRIBE