Impressive Corofin and Ballyhale produce a final flourish at HQ 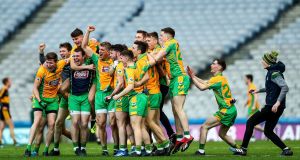 If these are the last club finals to be played on a St Patrick’s Day, at least they take their leave of the national holiday showing where the club game’s highest ceiling is to be found.

Ballyhale Shamrocks of Kilkenny and Corofin of Galway were both crowned champions again in Croke Park and though the 17,819 crowd was notably low, the fare on show from both champions was anything but.

Corofin in particular took the eye with a buccaneering display against Kerry champions Dr Crokes that was enough to earn them a 2-16 to 0-10 victory.

At a time of weekly death notices for Gaelic football, the Galway side have put together back-to-back All-Ireland titles with a brand of football that purrs when it’s in full flow. It’s four-to-the-floor, relentless on the front foot, full of clever lines of running and quick transfers of possession. They might save us all yet.

“You can say nothing went right and you can give all the platitudes and excuses you want to give but we were beaten by a far better team. Congratulations to Corofin. They showed us how to play a game of football.

“They took away everything we brought that we thought was good and they’re a serious outfit and they’re All-Ireland champions and they’re not for nothing. We hold our heads up when we’re beaten by the better team.

“They ran at us very hard, we probably didn’t stop them at source. They broke the lines, created two-on-ones, sometimes three-on-ones. We knew this was coming and we didn’t execute the way we wanted to execute.”

When the management of Dr Crokes – themselves the last All-Ireland champions before Corofin – are handing out a verdict that generous, it’s worth taking notice.

This wasn’t supposed to be a blow-out. Corofin were favourites but not by any great distance. Indeed Crokes beat them by nine points the last time they met two years ago. But right from the off here, the defending champions came at the Kerry side like a sheet of driving rain.

They made four goal chances inside the opening 22 minutes and took two of them. Their second was palmed home by Ian Burke at the back post after a scintillating passing move that shifted the Crokes defenders around like unwitting chess pieces. The Kerry side lost defender John Payne to an arguably harsh red card before half-time but the way Corofin were playing, it was hard to say it made a massive difference.

As for the hurling final, the beating Ballyhale put on St Thomas’ was even more extreme but at least it was somewhat expected.

Driven on in attack by TJ Reid, Adrian Mullen and an untouchable display from Colin Fennelly, the Kilkenny champions took their seventh All-Ireland title with a 2-28 to 2-11 victory. And on the sideline, in a tracksuit and club socks, Henry Shefflin capped off his first season as manager with an All-Ireland title. Another one.

“It feels strange to be honest,” Shefflin said. “Little did I think when I took on this job that I was going to end up here. It’s just been an amazing journey, there’s been some amazing days, there’s been some very sad days – including the passing of Eoin Doyle, one of our panel members.

“It’s like life, sport is full of ups and downs but I must say that from the get-go the lads have applied themselves very well. I’m delighted, it was always a hope of ours that they’d come up here and compete in Croke Park and I’m delighted they did.

“We spoke at half-time here today, we were five points up, and it was just something I thought of in the lead up to the match. Eighteen months ago when I was in that dressing-room, we were six points ahead in the county semi-final and we ended up losing the second half by 16 points. Anyone walking out of Nowlan Park that day would have said, ‘Jesus, I don’t know about these lads’.

“So it’s been an amazing turn around. But wasn’t it great to use that today at half-time, to say, ‘Lads, that’s where you were and look where ye are now’. And they really drove on in the second half.”