Shamrocks hale and hearty as they claim seventh All-Ireland title 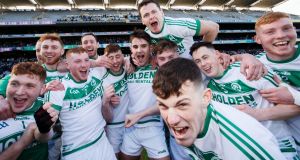 The great clubs regenerate on the job. Ballyhale picked up their seventh club All-Ireland here, starting only six of the players who lined out when they won their sixth in 2015. That’s a generation’s labour carried out in just four years, yet judging by the quality on show here it was anything but a rush job.

Yes, the Kilkenny champions are still TJ Reid and Colin Fennelly, responsible for 2-13 between the pair of them alone. But they are Adrian Mullen too, 19 years old and scorer of five points from play in his first All-Ireland final. They are Eoin Cody and Dean Mason too, both of them still to do their Leaving Cert and due out for St Kieran’s in the Leinster Colleges semi-final on Wednesday. They are, above all, not going anywhere anytime soon.

They never gave St Thomas’ a sniff in this final. Colin Fennelly, unplayable all day at the edge of the square, stuck his first goal after four minutes to put them 1-4 to 0-1 ahead. And though the Galway champions were able to cling on through the award of a dubious enough penalty soon after, they were choking in the Ballyhale vapours soon enough. A 2-10 to 1-8 half-time lead was never in danger of being questioned after the break.

“It was down to our attitude and out preparation,” said Reid afterwards. “We totally respected St Thomas’ and we kept going until the 68th minute. We didn’t shut off with communication even though there was a long injury-time at the end. We kept talking to each other, kept motivating each other. Overall, we were probably the better team for the whole 68 minutes but look, we trained very hard all year.

“From last January every player was to bring an extra five per cent and over the course of the year, Ballyhale has had a complete transformation. The new management brought freshness and new players came into the team. Adrian Mullen, the two corner backs – a mixture of youth and experience. Overall, hunger and work-rate.”

Colin Fennelly took the man of the match award, arguably deserving it for his second goal alone. The St Thomas’ revival midway through the first half had brought them back to within a point of Ballyhale and when an underhit Adrian Mullen shot dropped short and left on 23 minutes, it looked like a further boost to the Galway side’s morale.

But Fennelly, in a moment of unfeasible audacity, reached out to flick the dropping ball backwards over his shoulder and past Gerald Murray in the St Thomas’ goal. “I didn’t have many options,” Fennelly said of it afterwards, as though it was the most obvious course of action he could think of.

That goal came in the 23rd minute and from there to the end, it was a cakewalk. Darragh Burke kept at it at centre forward for St Thomas’ but Ballyhale grew visibly as the game progressed. Adrian Mullen popped up all over the forward line, knifing point after point. Fennelly had three different markers and burned them all. Reid was the usual money in the bank any time a chance had to be nailed.

The victory marked the end of Henry Shefflin’s first season as manager. It probably shouldn’t surprise anyone that success has attached itself to him immediately and yet nobody could have seen it being this straightforward for them. We asked Reid afterwards what the great man brought, since he couldn’t bring the thing that itself made him great.

“He’s a modern player, just retired in the last year. So he’s modern in terms of how the game is changing and how we needed to change our style of play. You saw today, we went long then at times and held possession around midfield and used our coolness on the ball to pick passes of five-10 yards to get out of trouble. Overall, it’s his hurling brain and his leadership and motivation as well.”

As for Shefflin himself, putting his finger on what sets Ballyhale apart comes as easily to him as everything else.

“I think they just believe,” he said. “That belief is there that if they get an opportunity they want to take it. But, at the same time, they’re great players. No different to the Thomas’ lads, they applied themselves very well. But when you have Michael [Fennelly] and you have Colin and Joey [Holden] and TJ and they’re working harder than probably anyone else, then what are you going to do only follow them. That’s the template you have to follow and that’s probably the secret to it.

“You know, it’s just about putting in that work and the hours and hours of practice. You imagine all the kids in Ballyhale today, what do they want to do tomorrow morning? They want to go hurl.”

And on it goes.

1 America at Large: On Long Island, longing for a return to our field of dreams
2 Dr Claire Molloy: ‘It is a privileged place to be, on the frontline’
3 Australian rugby staring into abyss as another crisis hits
4 Bournemouth’s Howe becomes first Premier League manager to take voluntary pay cut
5 ‘For 25 minutes I ran out of oxygen’: Pepe Reina on his coronavirus battle
Real news has value SUBSCRIBE