Wonders of western world double down as Corofin blitz Crokes 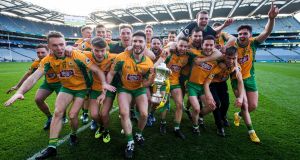 The Corofin team celebrate with the the Andy Merrigan Cup. Photograph: Tommy Dickson/Inpho

The anticipated summit between the clubs who had shared the last two AIB All-Ireland football titles never got out of the foothills. Just like last year, a small crowd – 17,819 – was left to marvel at the performance of Galway champions Corofin, whose sumptuous football left a committed, energetic Dr Crokes trailing in their wake.

So the Galway club became only the fourth to retain the All-Ireland and their 2017 predecessors were making no excuses.

“They played us better. They took away our strengths. They played really good football. You can say the sending-off was a turning point, it wasn’t really. We can be honest enough: we were beaten by a better team.”

The outcome means that Corofin have won back-to-back titles by an astonishing accumulated margin of 27 points.

Crokes lost their captain and corner back John Payne to a straight red card just before half-time for kicking out at Dylan Wall while on the ground after a hefty challenge but the die had already been cast at that stage with the Kerry side desperately hanging on and trailing by four, 0-6 to 2-4, which was stretched to seven by the break.

The two goals could have been doubled, as Daithí Burke – the TG4 man of the match – carved through the opposition in the 12th minute and sent a point whistling just over the bar whereas seven minutes earlier Wall had clipped the crossbar with a dipping shot.

It was a first half of mesmerising football from Corofin. Their ability to run, support the run but always visualise the possibilities of a kicked pass tore Crokes apart. They are in this mood capable of moving the ball on like basketballers, quick touches to the man in space and radiating goal menace whenever there’s the slightest crack in the opposing defence.

The first goal saw Martin Farragher do well to keep a ball in play, play it into the path of Dylan Wall, who curled a first-time kicked pass, soccer-style, out to Justin Leonard and his low hard shot gave the champions the lead for the first time, 1-1 to 0-2 – eight minutes gone and a long, hard afternoon beckoning for Killarney side.

Crokes are a serious outfit and beat Corofin in the semi-final three years ago. They were undaunted by the early goal and stayed afloat for the first 20 minutes before starting to list.

Talented corner forward Tony Brosnan kicked his frees, Micheál Burns lofted over a fine point and David Casey erupted from centrefield to kick another. They weren’t going to roll over but it was shaping up as an awesome task.

At times when on the offensive, Corofin marshalled all 14 outfield players within their opponents’ 65-metre line. They probed, wheeled away and came again, kicked with precision and counter-attacked like bandits on an express train.

Wall and his wing-back colleague Kieran Molloy pushed up consistently and when they got a run on the backs, chances were created.

Full forward Martin Farragher was a conspicuous weapon and finished the day with four points from play with just one wide, right at the end when the contest was laid out on a slab. He was also involved in the final’s attacking piece de resistance, which came in the 23rd minute when a sweeping, instinctively directed sequence of hand-passes resulted in the second goal.

Farragher, Daithí Burke and Ian Burke – again sublime in his orchestration of Corofin’s forward movement – put together a sequence of passes that opened up the goal for Gary Sice, who ended the day with another big total, 1-5, to slap the ball into the net.

“We just seemed to be getting in behind them anytime we went forward,” said victorious manager Kevin O’Brien. “The two goals, the first one in particular were well-worked. We’re always looking to create the chance; we moved the ball through the hands as quick as possible. That gave us good opportunities. The sending-off threw us a small bit in how we were going. But the two goals were great to get. Big scores.”

He had a point about the effect at half-time. Corofin had a scrappy third quarter, making unforced errors and losing focus a little. It didn’t matter. Crokes battled gamely but with waning accuracy and there was a poignant sense that Colm Cooper and another great servant of Kerry football Eoin Brosnan, both of whom came off the bench were taking their curtain call in Croke Park.

Scant consolation but they bowed out on the same pitch as a truly outstanding team.