The wonderful world of Gaelic games heads for Waterford 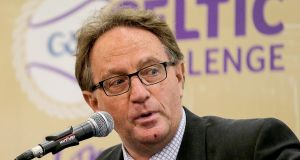 Appropriately for the GAA’s senior Waterford ambassador, Pat Daly, the association’s director of games, is MC for the launch of Renault’s sponsorship of the World Games, which will be largely played in the county – with finals in Croke Park.

The scale of the competition is impressive with teams coming from all over the GAA’s international units – 1,300 players from 10 different regions. Daly’s PowerPoint presentation reminds you that former association president Liam O’Neill once said in New York that one day there could be more members overseas than in Ireland.

Speaking afterwards he draws a distinction between old-style patterns and the modern equivalent.

“Traditionally Irish people went to England and it was a replication of what you got in Ireland and that cultural provenance. The younger Irish emigrants, who have gone to Asia and Europe have brought a different dynamic and mindset and very much identified with the games even though ironically not all of them would have had an involvement with the games in Ireland.”

Invited to attend the Asian Games earlier this year by Dr Eoin McDonagh, from NUI Galway and son of former president Joe, Daly went to Bangkok and was hugely impressed by what he saw.

The most resonant tale of the GAA’s global activity strangely doesn’t even concern an Irish ex-pat but a Yorkshire man.

“Paul Carpenter is unique because he went to Singapore and came across the Singapore Lions [GAA club] and they had six women’s teams at the Asian games and 80 per cent of those weren’t Irish. Extraordinarily, he then went to South Africa, took the model he’d seen in Singapore and set up SA Gaels in the Johannesburg townships, which has arguably been the biggest development in the overseas area.

“They were at the Asian games this year and they bring something unique to the whole event in terms of their culture, the sense of who they are and for me that’s what sport should be really all about.

“So an Englishman from Yorkshire, who encountered Gaelic games in Singapore goes to South Africa, sets up the South Africa Gaels.

Six years ago the GAA struck up a relationship with the Shanghai University of Sport. An All Stars hurling trip provided an opportunity for demonstrations of the game and students from the university travelled to Dublin to study Gaelic games, an academic option that remains for students and one that continues to be exercised, albeit not every year.

SUS, for its part, extends the use of facilities in the city to the local GAA club.

Daly says that overseas involvement, “drives social engagement as distinct from social competitiveness, which has tended to be the nature of it in this country. Okay, they play and compete but at the end of the day it’s about identity, collectivism and identity”.