Whelan and Concannon keeping the burden off Joe Canning’s shoulders 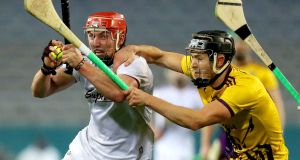 The second half was less than 10 minutes old and already Wexford were running short on ideas. They were Einstein’s definition of insanity made flesh, intent on working the ball out of defence despite ample evidence that Galway were in no mood to let them. On this particular occasion, it took three passes and three dropped balls to get as far as midfield. Whole city blocks have been built on less heave and wheeze.

When Jack O’Connor turned to tidy up the latest spillage, he was met with a clatter by Conor Whelan. Though the Galway forward was always second favourite, he outmuscled O’Connor and was able to turn away and flick a pass out to Brian Concannon on the sideline. With a heap of Wexford defenders bunched in around the middle, Concannon was able to pick out the overlapping Johnny Coen in space and Galway went 1-17 to 0-13 ahead.

On a night when Whelan and Concannon put a combined 1-8 from play on the board, there’s a fair chance this was the score Shane O’Neill took most pleasure in. One they made rather than anything they put up themselves. Galway’s gameplan was based around using Wexford’s running game against them. The overlapping defenders, the off-the-shoulder forays up the pitch - they were cut off at source by the Galway forwards time and again.

“The Wexford gameplan that we have been coming up against for the last number of years is kind of dependent on getting out past that first tackle to create an overlap,” says Francis Forde, selector for Galway’s 2017 All-Ireland win and throughout Micheál Donoghue’s time in charge. “So the problem that emerged in that game for Wexford was that time after time, they couldn’t get out past that first line of tacklers. Too often, they would get caught.

“Be it Conor Whelan, Joe Canning or Brian Concannon, somebody got in, slowed them up, made them turn back or got the ball to the ground for a turnover.

“And a turnover there, in between the 45 and the 65, that’s deadly in the modern game. Because what it generally means is that a full-back or a corner-back has been dispossessed and not only have they been dispossessed but they’re out of position now and there’s space in behind. Conor Whelan in particular was excellent in that area against Wexford.

“The ones you get from a turnover, when the other side have the potential to get forward themselves, that’s nearly a two-point swing in modern hurling. Teams have 40 to 50 possessions a game and once a team is able to make space and get possession in their own half-back line, you’re nearly guaranteed a shot at the posts at that stage. That’s how hurling has gone.

“That’s what makes turnovers such a huge thing. The great skill there, is not only getting the turnover in a key area, but shifting it out of there quickly so that you are now on the attack. If you’re able to get it out of that crowded area immediately and secure possession, it’s near enough a guaranteed score.”

As a pair, Whelan and Concannon are a year apart in age but a world apart in experience. Whelan was still only 18 when he played in the 2015 All-Ireland final, coming straight out of minor and holding his own at wing-forward. If you want a measure of what a prodigy he was, consider that he won Young Hurler of the Year in his third season on the panel. The game against Wexford marked the start of his sixth championship campaign. It was also his 24th birthday.

Concannon was only a year behind Whelan’s group at underage but he’s had to wait a lot longer to find his way into the Galway starting line-up. He was among a raft of players brought in for the 2018 league in the aftermath of Galway’s All-Ireland win. He featured here and there through the championship that summer but was subbed off or subbed on the further the year went. In the end, a red card in an under-21 game meant he was suspended for the All-Ireland final against Limerick. It was a sour end to a decent first year.

“Brian is a really intelligent player,” Forde says. “He’s a really bright guy. Yes, he doesn’t have the same level of physicality as the others in that forward line but he has a great hurling brain. He takes up really good positions and he has that eye for a goal-creating pass to split the defence. We would have seen that even in league games last year where you would think there was a handy point on but Brian would see something that maybe five per cent of lads see.

“For someone coming onto the team, a game like that is so important. I think he came away from that game knowing that he is comfortable in being able to deliver. After that, it was a matter of getting more games and more chances. That’s why last year was so disappointing ultimately. For all of us but especially for someone like Brian. You could see that fellas like him would have progressed as the championship went on. He had played well against Kilkenny, he was all set to go on and have a big championship. But then went out the following week.”

Between them, Whelan and Concannon scored 1-8 from play in the Leinster semi-final and had the last pass or got fouled for the free that led to another 0-4. On the night, that added up to half of Galway’s scoring total and when you add in the amount of defensive work they brought, there wasn’t a lot that was good about Galway’s night that didn’t involve them.

They got out of each other’s way impressively too. For Concannon’s last point, Whelan jogged over to the Cusack Stand side as Joe Canning placed the ball for a free on Galway’s own 45, just under the shadow of the Hogan. As he did so, Cancannon was actually standing off the pitch, right beside the umpire on the Cusack side of the Hill 16 goal, as if he was hiding from his marker Simon Donoghue.

With the whole of the Hogan Stand side empty, he blindsided Donoghue and sprinted across into the space, using the room he’d bought himself to swing over a spectacular point from the sideline. Hawkeye was needed but even just the fact that Concannon was willing to shoot from such a tight angle - he ended up out over the sideline as the ball went between the posts - says a lot for his confidence. He and Whelan are the Galway full-forward line now. Written in stone.

What that score also showed was a crucial component of any All-Ireland challenge Galway are going to make. Canning’s role against Wexford was essentially broken into three - he took the frees, he made endless tackles and he distributed ball inside, as in this case to Concannon. What he didn’t do at any stage was take a shot from play.

It goes without saying that Galway will need Canning to be all-singing and all-dancing at some stage. But equally, the fewer of them that are needed, the further they are likely to go. In this form, Whelan and Concannon are the best hope Galway have of keeping the burden off his shoulders.