Bright young players could bring Kildare out of Dublin’s shadow 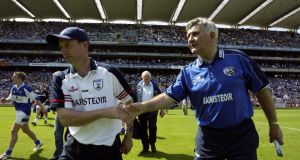 Pádraig Nolan has been watching Kildare football long enough to discern the trends. This weekend the county faces Meath in a Leinster semi-final, which affords the winner a crack at Dublin in the strange and disorientating championship.

One of the county’s home-grown managers (he took over after catching everyone’s attention during a stint with Offaly in the early 2000s ), he was still playing when Kildare hit the big-time 30 years ago this autumn with the appointment of Kerry legend Mick O’Dwyer as manager.

The second Leinster championship, in 2000, hasn’t been added to since but under the next big-name manager, Armagh’s All-Ireland winning captain Kieran McGeeney, Kildare again got into the national conversation with a tight and slightly unlucky defeat in an All-Ireland semi-final against Down in 2010.

“Kildare got a higher profile because of Mick O’Dwyer,” according to Nolan, “and Kieran McGeeney did the same because they’re just big names. Unfortunately, we’ve promised more than we’ve delivered; it’s 20 years now since we won a Leinster – but it’s 10 years since anyone else did either apart from Dublin, which goes to show the shadow they’ve cast over the past decade.

“Kildare is a huge football county – but ironically with very little success. A lot of people think of the county as reasonably regular winners or ‘being up there’ but in reality we’ve been hovering somewhere between mid-table and the bottom half of top table. I don’t think other Leinster counties fear Kildare the way they fear Dublin or Meath in their heyday.”

He sees a pattern in his county’s rise each decade since 1990: managers with All-Ireland stardust to sprinkle and a solid base of underage achievement. This year, another high-profile manager from Kerry, Jack O’Connor, who managed them to three All-Irelands, has already got the championship up and running with victory over Offaly.

Among the players he has at his disposal are four Leinster minor-winning teams and the under-20 All-Ireland champions from two years ago. Nolan believes the combination of manager and rising talent is important, as one can labour without the other.

“You go back and Kildare had a super under-21 side in 1965. When they were supposed to come good in the 1970s, Dublin had become dominant out of nowhere. They reached six All-Ireland finals running, which equalled the record, and the team we had went by the wayside. We’ve done a huge amount of living under the shadow of Dublin.

“I can’t ever remember Kildare beating Dublin in championship until the replay in 1998, and it’s only happened once since.”

Nolan was involved at underage level as well, managing the team that won the Leinster under-21 in 2004 and which, together with the 2008 side that reached the under-21 All-Ireland only to lose to Kerry, provided the material for McGeeney’s successes which, although achieved through the qualifiers, maintained Kildare as a top-eight county for half a decade.

For him, though, ground zero is the arrival of O’Dwyer in the autumn of 1990. It was a year after he had stepped down after 15 extraordinarily successful years in charge of Kerry, winning eight All-Irelands. He acquired players from the provincial-winning minor teams in 1991 and under-21 the following year, but his arrival electrified the county.

“It was absolutely massive,” recalls Nolan. “I would have been playing myself at the time. The excitement among players at the time was huge and there was no difficulty getting players to come to training. Micko was like a brand and brought huge excitement and raised the boats everywhere just like he did in other counties he went to. It was as if he’d brought magic to the county.

“People still talk fondly about it – if they can remember that time. He brought a new way of doing things in everything to with the GAA in Kildare. I don’t think the great players of the 1990s would have emerged if he hadn’t been there.”

He’s positive about the weekend, even if it might be a bit soon for some of the younger, emerging players. At least the groundwork has been laid.

“Underage delivery hasn’t been bad: four minor titles in the last 10 years and an All-Ireland at under-20. If any county is going to win at senior level they have to be picking up a share at underage.”