Keith Ricken not surprised as resurgent Rebels seize the day 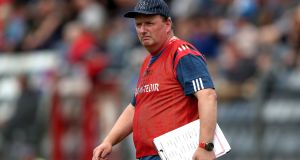 Keith Ricken: “If you’re 23 or 24 and on the Cork football team for a couple of years and looking at young fellas coming through, you see there’s hope. There’s plenty of guys with the same commitment, skill and mentality as yourself.” Photograph: Bryan Keane/Inpho

Keith Ricken is not surprised but he can be surprising. The Cork under-20 manager is aware that five of his All-Ireland-winning team from a year and a half ago contributed to the resurrection of Cork football in the saturated silence of Sunday in Páirc Uí Chaoimh but he long ago made his choice between sound and vision.

“I’m a listener. I love the radio. I catch up with the video later and my wife watches the TV but I prefer to make the pictures myself. It was exciting. You could nearly feel Bernard Flynn coming out of the radio and he’s a neutral.

“I mean I know the value of television and the championship at the moment. There are old people with no-one to visit them and at a difficult time of the year. I’m serious. This is almost like vitamin D for them and the one thing that would complete it is if they could go out and drop into a shop and say to someone: “What about that! Did you see that yesterday?”

“That” is the goal by AFL prodigal Mark Keane, back with the blessings of his club Collingwood to bring old-style physical presence to the edge of the square.

His supplier Luke Connolly had already given notice in ordinary time with a laser delivery into the full forward, who got slightly too Australian in his tussle for the ball; otherwise it would have been a textbook mark.

“Every team in the world – their manager goes out, worrying whether the team will turn up because you know what they’ve put in,” says Ricken.

“I thought Cork turned up mentally and physically and stuck to the task even when things weren’t going well. Coming down the home stretch, they held on to the ball and didn’t risk possession until Luke made his move.

“Okay, the ball dropped slightly short but in coaching you always say, ‘aim for the far post’ and if it doesn’t go over there’s a better chance of keeping it in. It could have gone to penalties but that wouldn’t have fazed them. The long, short answer is that I wasn’t surprised!”

Everyone at this stage knows the context. Cork, without a championship win against Kerry in eight years, somehow conjured the extra-time thunderclap that blew the neighbours out of the All-Ireland – with respect to Keith Ricken, to the astonishment of nearly everyone else – and sent themselves into a Munster final against Tipperary.

He’s been at the coalface for a good while now. In charge of the games at Cork IT, he trained the college to its first Sigerson in 2009 and has had a ringside seat while Ronan McCarthy and Cian O’Neill – another on the CIT faculty – use the facilities to prepare for this weird but delirious, fast-forwarded championship.

Cork haven’t come quite from nowhere. In 2019 there was a rising tide in the county’s football. Ricken’s under-20s and the minors each won their All-Ireland and McCarthy guided the seniors to their best finish against Kerry since the 2015 draw and replay and significantly got the to the top table, a place in the Super 8s.

They lost all three matches but were impressively competitive in Croke Park against Tyrone and also Dublin. The problem with being on the way up one year is that you have to keep going thereafter.

“I genuinely believe there’s a good cohort of younger guys, who have played at colleges’ level with UCC and Cork IT, they’ve picked up experience and have been showing good form.

“They’d have been the equal of the Kerry lads at colleges’ level so there were indicators there. My concern was that the championship in Cork had run a good bit longer than the one in Kerry so the lads had less time to prepare as well as a lack of hard, quality games in the run-up while Kerry were playing Monaghan and Donegal in Division One.”

This is a good point. Cork spent the league in Division Three and McCarthy was publicly unimpressed when after an avalanche win against Louth, his team had their next fixture conceded by Longford. But Ricken says that you could see the team meant business in training.

“Having watched sessions, it was obvious they knew their tactical plan and it’s a good sign when a team isn’t making it up as they go along but it took individuality to win it.

“It’s like an orchestra. You don’t want to undermine the talent of the soloist but you want to make sure they play in harmony with everyone else. That’s what management is about. It’s funny but listening on the radio, I got no sense of panic.”

Cork played a modern game, maybe influenced by Sigerson football with its emphasis on crowding and minding possession and not getting any rushes of blood to the head – all crucially in frequently awful conditions.

He pays tribute to Conor Counihan, former captain and All-Ireland-winning manager, who is officially the project co-ordinator for Cork’s five-year football plan but in the vernacular he’s the county’s czar or commissioner.

“The amount of work Conor Counihan puts in is phenomenal. It’s all being pulled together by him. Hats off to him.

“If you’re 23 or 24 and on the Cork football team for a couple of years and looking at young fellas coming through, you see there’s hope. There’s plenty of guys with the same commitment, skill and mentality as yourself. Hope is huge. You’re not here on your own. This isn’t a last stand.”