No way back: Five times Kerry were on the end of late upsets 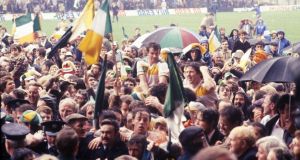 Last weekend’s show stopper came from Luke Connolly’s attempt at a point to equalise, as time was running out and Kerry leading by a point. Mark Keane, on loan from AFL club Collingwood, had presumably been added to the panel to provide a target for early ball and he beat another of the GAA’s former exports Down Under, Tommy Walsh, to the ball and finished to the net without hesitation - a death sentence for Kerry in this championship ‘like no other’. Foxsports in Australia passed on the exciting news: ‘Magpie Mark Keane enters Gaelic footy folklore with match-winning, last-second goal.’

The year 1983 was on everyone’s lips by the end of Sunday. In remarkably similar circumstances - Kerry were on their way to a record ninth successive Munster title whereas they were hoping to emulate the eight this year - Tahdg Murphy got on the end of a long-distance free to clip the ball into the net off a post. Murphy’s interview with Dermot Crowe in the ‘Sunday Independent’ two days ago brought it all back, prophetically as it turned out.

The most famous and far-reaching score in this list. With Mick O’Dwyer’s team running down the clock on what would have been a five-in-a-row All-Ireland 37 years before Dublin recorded the achievement, Offaly, having stayed in touch on the scoreboard, sprang the trap when Séamus Darby got in for the 69th minute goal. In the 138 seconds remaining Offaly actually kicked a wide and Kerry had one last chance, a prolonged attack with three separate possessions none of which were converted. “Sensation of sensations,” ran the late Micheál O’Hehir’s commentary - without contradiction.

A lower-profile shock but a shock nonetheless in what was Waterford’s last win over Kerry in championship. On the day when Mick O’Dwyer made his debut at wing back, Kerry’s complacency came back to haunt them, as they turned up without a full team and reserve corner back Tim Barrett went in goal, which was a factor in Waterford’s two goals. The sides were level in the last minute and Kerry relieved at the prospect of a replay when All-Ireland hurler Tom Cunningham came up from centre back and kicked the winner. In the remaining minute Kerry missed a 21-yard free.

A little remembered match that cost Kerry a shot at five-in-a-row nearly 50 years before Offaly stopped another in 1982. There had been concerns that Kerry were ageing and played a coming Cavan team in their back yard - there’s a still a plaque in the ground to mark the occasion. The champions were less than two minutes from surviving a strenuous threat to their five-in-a-row campaign when Vincent McGovern rushed the ball to the net. It was Kerry’s first championship defeat since July 1928. Cavan went on to win Ulster’s first All-Ireland.