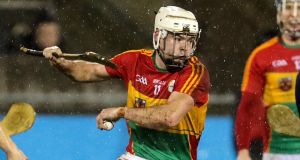 A committed and heartening performance by Carlow last week in Galway but if their progress to this championship, the highest level at which the county has competed were to be distilled to one fixture, this would be it. Having the aristocratic neighbours around for 70 minutes – they haven’t met in championship for 26 years – is the most striking symbol of how far they’ve travelled.

It will however be tough. Any doubts about how Kilkenny might cope with an extensive injury list were allayed against Dublin last week, as Brian Cody and his management recalibrated the game plan very effectively at half-time.

Although Martin Kavanagh was the leading light in the second half of Carlow’s resistance last week, when they refused for so long to let the margin grow beyond three, it was a solid team effort. Although they felt that they had coped with the physicality brought by the champions, the test for Colm Bonnar’s team will be being required to perform at that level repeatedly.

Kilkenny tightened up their defence for the second half against Dublin with Huw Lawlor and Pádraig Walsh moving to their most effective positions and TJ Reid’s clinical second-half display in attack created too much scoreboard pressure.

It should equally put this match beyond even Carlow’s soaring optimism.

Even before the schedules were published, this had all of the hallmarks of a crucial fixture, bringing together the third- and fourth-placed counties in last year’s Leinster championship. If Dublin were to break through, this always looked to be the most targetable match.

Mattie Kenny’s team are at home and Parnell Park is a considerable advantage, its tight confines not making it any easier for visiting forwards to find space against an excellent defence and making the preferred middle-third congestion all the more of an ordeal.

Last week’s disappointment against Kilkenny raises questions, though. A final tally of 1-21 wasn’t bad and it’s better than Wexford have managed in their two most recent championship matches against the same opponents but chances to exert real pressure were squandered – two goal chances that yielded 0-1 and a scoring rate that was down 50 per cent in the second half.

There are question marks over Liam Rushe’s involvement because of an ankle injury, which is bad news, given the turmoil his rampaging style caused and also, Wexford full back Liam Ryan will guarantee a 70-minute battle.

Davy Fitzgerald’s team have the disadvantage of coming into this cold, not having played since the disheartening league quarter-final against Galway. They do have virtually a full hand to play, unlike Dublin.

Their scoring shortcomings have derived from the rigidity of the sweeper system and an out-numbered attack, but the presence of Conor McDonald, Lee Chin, Rory O’Connor and in whatever role, Cathal Dunbar, just looks to give the visitors enough of an edge up front.

Munster champions against All-Ireland champions and a re-run of last year’s breathtaking semi-final at Croke Park. Things have changed a good bit since then, though, and most alarmingly from a Cork view in the past week. Whereas the disparity between the respective league campaigns, stark in Limerick’s sweep to further success and Cork’s stalling, wasn’t taken too seriously the fall-out from Tipperary’s raid at Páirc Uí Chaoimh has left John Meyler’s team in desperate need of something from this fairly forbidding match.

In Cork’s favour is their win - the All-Ireland champions’ only league defeat – in the Gaelic Grounds last February, a perfect dress rehearsal but for the fact that Limerick went out of their way to reveal nothing on the evening. The visitors may also have a stronger line-up with Bill Cooper back and Alan Cadogan in line   to make an appearance.

How high can they jump after last week's fall? The question is all the more relevant given that the weaknesses exploited by Tipp are all capable of being targeted by Limerick.

The worry for Meyler is that areas of concern in last year’s championship came back to haunt him last week: poor defensive focus and a lack of reserve strength. Th return of the previously discarded  Mark Ellis at centre back doen’t have the feel of a structured solution.

Allowing for these problems, Cork still posted 1-24, mainly dependent on Patrick Horgan’s one-man barrage but if they get an improvement in attacking support – and  the surprisingly dropped Shane Kingston had his moments and – the free-scoring can continue but can anyone really make a case for a complete reversal of fortune?

Nearly a year on from the day of the infamous “ghost goal” draw and both teams are in changed circumstances. Although Waterford had ostensibly the better league, its finale of comprehensive defeat by Limerick when combined with Clare’s somewhat more comfortable win in Walsh Park leaves Páraic Fanning with an uphill vista even at this stage of affairs.

This is in Thurles against a Tipperary side already showing impressive physical conditioning and executing the tactical prescriptions of Tommy Dunne and Eamon O’Shea to lethal effect, especially by John O’Dwyer and Séamus Callanan.

Waterford’s more free-wheeling style comes with its own health warning. During the days of Derek McGrath and Davy Fitzgerald and reinforced defensive sensibilities, the county always really struggled against this cohort of Tipperary hurlers.

In the last five meetings going back to 2011, Waterford have conceded an average of nearly 0-30 per match (29.3) and lost by an average of nearly 11 (10.9). On the basis of what we saw last week, making a dent in that trend would be achievement enough. Anything more significant is hard to envisage.