Monaghan and Armagh have firepower to advance in Ulster

Ulster and Connacht SFC: Monaghan haven't lost in championship in Breffni in 32 years 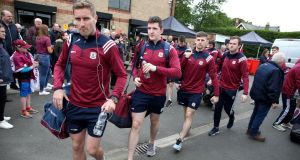 Gary O’Donnell and the Galway team arrive at McGovern Park, Ruislip, to face London in the Connacht quarter-final. They are unlikely to be tested by Sligo. Photograph: Inpho

Monaghan were a kick of a ball away from an All-Ireland final last season and haven’t lost a championship game in Breffni Park in 32 years. So why then is there such a palpable nervousness in the county over this fixture?

Partly it’s down to the fact that nobody will know who they’ve got to play in midfield until they line up in the parade - Darren Hughes is definitely out, neither Kieran Hughes nor Niall Kearns played a minute of the league and Neil McAdam and Gavin Doogan have had interrupted preparations as well. The sixth- and seventh-choice Monaghan midfielders? Answers on a postcard.

Rip the middle out of any team and they’ll surely take their time finding their feet. Cavan have a full pick here and even when Monaghan have been at full strength in recent years, there’s never been much more than a kick between them. Cavan’s hopes could rest on testing Drew Wylie in the air, where he has been known to struggle occasionally. If they plunder a goal or two, the visitors will struggle.

In the end, Monaghan probably have that bit of extra firepower, both from play and placed balls. A Cavan win wouldn’t be a screaming shock, all the same.

A contrast of styles here, with Armagh’s probing, free-flowing game coming up against one of the last defiantly massed defences around. Armagh have named four championship debutants and their match-winners are in the full-forward line in the shape of Jamie Clarke, Rian O’Neill and Rory Grugan.

Down’s intention will be to starve them of ball and live off turnovers and counter-attacks. But if it wasn’t enough to get them out of Division Three, it’s hard to imagine it will have evolved enough to see them through this. Armagh are the better side; time for them to show it.

Galway were ropey enough in London and are still casting around for bodies to a certain extent. The fixture list has been pretty kind to them, however, and a Sligo side that endured a rotten league surely won’t trouble them unduly.