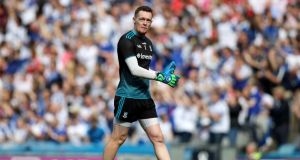 For two of the past three seasons Monaghan’s Rory Beggan has been the Football Championship’s top-scoring goalkeeper, and in the third campaign Cavan’s Raymond Galligan topped the charts.

The two face off this Saturday evening, and, in a clash between the two counties who have drawn the most times in the history of the competition (there’s been 13 of them), it could well be one of their goalkeepers who proves the difference.

From the 2011 season, when Stephen Cluxton came up to kick the crucial free in Dublin’s All-Ireland final win over Kerry, to the end of the 2018 Championship, there have been 193 championship points kicked by goalkeepers. And no one has scored more than Beggan or Cluxton in that time.

They’ve managed 0-43 each, so that’s 45 per cent of the 193 between the two of them. Another 22 goalkeepers made up the remainder. Beggan’s total, however, is from matches in 2013 or thereafter, while Cluxton has of course been protecting the Dublin goal since before 2011.

If you look back on the past 10 championship seasons, Cluxton is out on his own with 0-48. While the only goalkeeper to score a goal in all that time was Offay’s Alan Mulhall, he scored a penalty against Clare last year. The teams who have not had a championship scoring goalkeeper over the past decade are Leitrim, New York, Fermanagh, Derry, Carlow, Clare, Cork, Donegal, Laois, Louth, Tipperary, Waterford, Westmeath and Wexford.

Last summer Beggan scored a remarkable 18 points in eight matches; the summer before, six was enough to lead the goalkeepers’ scoring chart. And the year previous he was outdone by his opposite number in this weekend’s Ulster championship quarter-final at Breffni Park.

Cavan’s Galligan scored 0-6 in the 2015 championship – the converted goalkeeper (he began as a forward on the Cavan team) is one of the best number ones in the business from placed balls, and over the past 10 years he has scored the sixth-most of any goalkeeper in the championship. In this year’s league he scored 0-5 in his seven matches.

In all Beggan has top-scored in three of the past five championships, with Cluxton topping the keepers’ charts in four of the five previous to that. In 2009 there were no scores to count.

While Cluxton’s 2011 heroics opened the gates for score-hungry goalkeepers – he scored 0-12 that summer, then followed up with 0-9 in 2012 and 0-16 in 2013 – he hasn’t scored in a championship match since the 2015 All-Ireland final. Dean Rock has assumed free-taking responsibility from distance, as well as anywhere in scoring range on the left-hand side.

In 2011 the Dublin stopper was one of only three goalkeepers to score in that season’s Championship. There were only two either side of that in 2010 and 2012. By 2013 eight goalkeepers would raise a white flag, eight did so again the following two summers. There were seven in 2016, one less a year later, while last summer nine different goalkeepers scored for their county in the championship.

It’s some turnaround from 10 seasons ago: in 2009 no goalkeeper registered a championship score. Last summer, they scored 1-42 between them.

During the league Tyrone’s goalkeeper Niall Morgan took things a step further with two points from play – one against Mayo and the other against Roscommon. Both Morgan, who is the third highest-scoring goalkeeper over the past 10 seasons with 0-21, and Beggan had already scored from play in club matches.

In Tyrone’s first two league matches this year, defeats to Kerry and Mayo, Morgan had a combined 30 in-play possessions. So not including kickouts. That included solo runs, interceptions, and general link-up play. He also had two shots, one of them providing one of his two league points.

Roscommon’s former goalkeeper Shane Curran had heads spinning when he began kicking long-range frees, taking penalties and carrying the ball out from his defence during the early 2000s. Still he remains the only goalkeeper to have scored a goal and point in the same championship match – against Sligo in 2004.

Curran, however, had played at all grades for the Rossies as an outfield player. A ball-playing goalkeeper can allow for quick counters, provide an exit option for defenders being pressed high, and create numerical overlaps against deep-lying defences. And often a goalkeeper will have the longest kick on the team, particularly off the ground, which lends itself to long-distance free-taking and slotting 45s.

Like Morgan, Beggan is regularly used as an extra body supporting the Monaghan defence when in transition

Although, to see where the line should probably be drawn, look no further than Rory Beggan’s hot-headed shot in the dying moments of Monaghan’s All-Ireland semi-final defeat to Tyrone. Passing to an outfield player was certainly still the better option.

Like Morgan, Beggan is regularly used as an extra body supporting the Monaghan defence when in transition. Along with Cluxton he also sets the bar in terms of kickouts – both players retained over 85 per cent of their restarts last summer.

So, given how the role of the goalkeeper has completely evolved in a decade, who knows where another 10 years will bring us. This weekend one thing is for sure - expect to see Galligan and Beggan do a lot more than catch, call, save and kickout.

1 Gerry Thornley: After 32 weeks the Six Nations is back up for grabs
2 Bennett girding his loins for impossibly unpredictable Vuelta
3 Stockdale and Ringrose on board with expansive Irish game plan
4 GAA expected to go ahead with championship under Level 5
5 Slaven Bilic hits out at €16.95 pay-per-view for West Brom’s draw with Burnley
Real news has value SUBSCRIBE