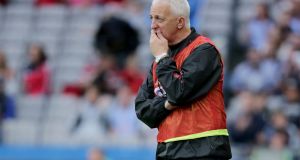 Conor Counihan as Cork manager in 2013. He has been appointed project co-ordinator which sees him implementing the highly aspirational #2024 – A Five-Year Plan for Cork Football. Photograph: Morgan Treacy/Inpho

In case Conor Counihan thought his work was done with winning the All-Ireland nine years ago, the end of a decade that started so well for Cork football appears to reel from one new low mark to another, and he has been appointed effectively the county’s football czar.

The official title is project co-ordinator with the remit of implementing the highly aspirational #2024 – A Five-Year Plan for Cork Football but there is also the symbolism of the county’s only All-Ireland-winning manager in three decades re-emerging at the helm of a concerted effort to reclaim lost ground.

In charge of the county team for five seasons, 2008-2012, Counihan has had to watch as the silvery legacy he bequeathed – four leagues, three Munsters and an All-Ireland – has been squandered in a spiralling decline of lost competitiveness in the province and the drop this year to Division Three of the league.

“Look, over the years we have won seven [All-Irelands] and never really had a plan,” Counihan says. “We didn’t cope well with success in terms of keeping our eye on the ball with development and ensuring that players coming through our system were up to standard. People weren’t committing as much either in terms of taking on teams.

“It’s understandable too. You could have two partners working and a mortgage so there are challenges.

“To me the issues are on the ground. If we don’t have someone doing a good job with the under-12s in whatever club it is then we’re not getting any of them through to Cork senior standard. That’s how I see the job: getting people to take on young fellas and coach them to a good standard.

“There are people out there doing these things but they need help. The board at this stage are investing resources – my own role, additional GDAs [games development administrators] and performance directors – but we still have to engage with people on the ground, those who have a passion for Cork football. There’s no fast fix.”

All its life, Cork football has had the unforgiving context of the game’s highest achievers, Kerry, next door but in the past it competed very well, especially in the under-age grades. Despite continuing success up until recently at under-21 level, Cork have produced few successful senior players.

Kerry, meanwhile, have won the last five All-Ireland minor titles, their run uninterrupted by the change from under-18 to under-17 and now under-21 has switched to under-20.

“Kerry seem to manage the transition from minor to under-21 or under-20 and on to senior better than we have in the last number of years. But on the way to those five All-Ireland minor titles they beat us twice along the way by just a point.”

The relationship between football and hurling is also one that can cause friction. “We’ve tended to play second fiddle to hurling,” he says, “even though we face challenges that hurling doesn’t. We’d be very spread. The minor football team last year had 28 clubs and 28 different schools involved.

“Hurling had around 80 per cent of their players from I’d say three or four schools so the logistics are difficult. Young footballers could be playing with ‘A’ schools, ‘B’ schools and ‘C’ schools and geographically there’s no hurler coming from Castltownbere.”

He sees the restoration of competitiveness as the main target once the development systems are overhauled. “It’s not about winning although we’d be happy to win along the way. It’s about making Cork competitive at all levels. No one minds constructive criticism but there has been so much negativity around and we need to change that.”