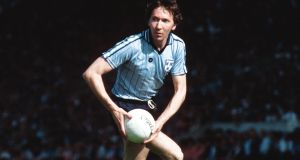 The passing of Anton O’Toole after a long illness at the age of 68 marks the first death among one of the most famous teams in GAA history.

The Dublin footballers who out of the blue won the All-Ireland title 45 years ago under the direction of Kevin Heffernan went on to participate in the memorialised rivalry with Kerry over the next decade and completely transformed the place of Gaelic games in the capital.

From 1974, the county reached six successive All-Ireland finals, equalling the record of Wexford a century ago – one which has yet to be broken.

An athletic forward, who could play anywhere in the front eight, O’Toole started at left corner forward that day in 1974, against Galway but was also associated with wing forward – winning All Stars in both positions – and having been persuaded out of retirement, was hugely influential at full forward on the team that won the 1983 All-Ireland.

Tall, left-footed and athletic, he had an easy running style and was tagged, "The Blue Panther" by Dubs supporters.

Tony Hanahoe, who both played with and managed him in All-Ireland successes, paid tribute as the news of his death emerged on Friday when recalling how he first noticed the player, who would soldier beside him and David Hickey in the Dublin – and what in 1976 would be the All Star – half-forward line.

“Anton was a tall, gangly, effective player at Synge Street. He was actually on the Dublin junior team that reached the All-Ireland final in 1971 and moved on up to the seniors. It’s hard to encapsulate everything but although he was quiet, anything he had to say was effective because people listened; they respected him.

“He was perceived as a very quiet man but was in fact a formidable member of the whole group. He was liked by his colleagues, known for his bravery, commitment and loyalty. Although very much a team player, he was always relied on to do his individual job and I don’t think he ever failed us in that. He could play anywhere from midfield inwards.

“He often started corner forward and came out towards midfield. He was comfortable playing all around there.”

The evidence is there over a long career. Two watershed matches make the point. Dublin’s unexpected emergence from Leinster in 1974 pitched Heffernan’s team into an All-Ireland semi-final against champions Cork.

Over 80 minutes, as it was at the time, Dublin met the challenge and overcame possibly complacent opponents. Writing on these pages Paddy Downey got to the heart of the 2-11 to 1-8 victory.

“ … three minutes later (47th), Anton O’Toole picked up a ball which broke across from McCarthy and shot it past Billy Morgan for the first goal of the game. A fine score. That was also the first turning point of the tense and spectacular battle and in the end was seen to have been the decisive blow.”

The most revered contest of the decade, the All-Ireland semi-final between Dublin and Kerry in 1977, was another where he impacted significantly. By this stage Hanahoe was player-manager of the team – Heffernan having stepped away for the year – and he remembers the day when the team’s late resurrection wrote its own history.

“In ‘77 he kept us in touch – but there wasn’t a day during that period when you would have felt that he wasn’t playing his part. That’s why he was such an obvious selection.

“As a manager, you would value all of those attributes but he would also always tell you what his opinion was. He wouldn’t have one opinion to your face and another behind your back. If he had a problem he told you straight.”

“O’Toole, particularly in the second half, was the inspiration of the winners’ forward division. His work-rate was tremendous and he scored four fine points to crown his performance.”

In David Walsh’s seminal Return to the Hill, published in Magill magazine 30 years ago, O’Toole is described as having the self-assurance (or temerity) to tell Heffernan that what he was saying at a team meeting was "a load of rubbish".

It is O’Toole who is credited with the irascible line in response to Jimmy Keaveney’s return to the panel in 1974 afte an unimpressive win over Wexford. Heffernan had enticed back the former Dublin player, who wasn’t old at that stage but neither was he in the shape of his life.

“David Hickey was also brought back and I was annoyed. There were two forwards and two fellas who had played in the league who were going to lose out. When I saw the two lads coming back, the feeling I had was, ‘Here we go again’.”

Events tempered his views, as Keaveney went on to become Footballer of the Year on two occasions and O’Toole described Hickey as having given in the 1974 semi-final “the greatest display of wing-forward play I have ever seen”.

Interestingly, in relation to his own comeback in 1983 and ‘84, he also tells Walsh that he was a faintly reluctant recruit, having retired. Although young and capable enough to be involved, he appears to have felt like Oisín I ndiaidh na Féinne.

“I don’t mean any disrespect to the guys in 1983 but that medal does not compare with the others ... I did not, could not, have the same rapport with the new group.”

After his playing career ended, O’Toole was involved as a coach with his club Tempelogue-Synge Street. He worked with Guinness as a computer systems developer.

“He had a great interest in racing,” recalls Hanahoe. He wasn’t a big gambler but he liked horses and was a frequent attender at race meetings. Anton did his own thing and led a very quiet, independent life. He was fond of a jar in John Mulligan’s, was good company and well respected. He never looked for attention.

“He was a good guy – and you can’t say that about everyone.”

John Costello released the following statement on behalf of the Dublin county board.

“Anton O’Toole was a footballing giant and a gentleman both on and off the field of play. The four-time All-Ireland SFC winner was a role model for generation after generation of Dublin footballer.

“The Synge Street legend is held in the highest of esteem by the current Dublin management and players, as he has been since he retired from the intercounty game in 1984.

“Anton was a brilliant forward who combined bravery, ball-winning ability, team ethic, style and scoring return to grace the playing fields of the country. He initially played for the Dublin juniors, reaching an All-Ireland final in 1971, before making his senior NFL debut in December 1972 against Longford.

“His championship debut came in the summer of 1974 against Wexford, scoring two points. It was the start of an illustrious senior career that was to see him win four Celtic Crosses, having played in eight finals, as well as being honoured as an All-Star in 1975, 1976 and 1977.

“In 1983 Anton was one of the main guiding lights that inspired Kevin Heffernan’s young team to All-Ireland glory.

“On behalf of Dublin GAA I would like to offer our sincerest condolences to his family and friends. Ar dheis Dé go raibh a anam dilís.”