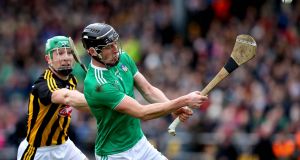 The emergence of the likes of Conor Boylan shows the strength in depth Limerick have. Photograph: Ryan Byrne/Inpho

We haven’t seen Limerick since the league final but everything about their campaign seemed to indicate that they had carried on from where they left off in 2018. They were very impressive in the spaces around Croke Park when beating Waterford seven weeks ago.

The evidence is that with the emergence of the likes of Paddy O’Loughlin and Conor Boylan the panel has deepened and with Will O’Donoghue recovering from injury, there’s no doubt that they have the best resourced squad in the championship.

Cover is scarcest in the full-back line even though Tom Condon had an excellent league but the first-choice line of Seán Finn, Mike Casey and Richie English are is good as any around. During the campaign, English stepped forward and raised his game to the level that many had foreseen for him during his Fitzgibbon days with Mary I.

I was particularly impressed by the display against Kilkenny. Nowlan Park isn’t the easiest place to go, as Dublin found out last Saturday, but they out-Kilkenny-ed Kilkenny: out-caught them in the air, out-rucked them on the ground and ran short-passing movements through the tightest of spaces in the middle third, something not a lot of teams get away with.

My assessment of Cork has dipped sharply since 4pm last Sunday

Limerick have had a week off to look at what’s been happening elsewhere but the disadvantage is that they’re playing a Cork team, who are now in a backs-to-the wall situation after last week’s disastrous home outing against Tipperary.

My assessment of them has dipped sharply since 4pm last Sunday. Their application was poor and they just looked out-of-sorts. They were out-fought and the defence needs radical surgery.

Tim O’Mahony may fulfil his promise to become a very good player but he’s not a man-marker. “Bubbles” O’Dwyer got seven points off him in Páirc Uí Chaoimh. Kyle Hayes was the best 11 in the country last year and Limerick are as adept at creating space as Tipperary were so it’s going to be a challenge.

They need a better game plan and the ability to think their way out of difficulties. Limerick are exceptional in the middle third of the field and that’s where Cork got cleaned out last week.

They tried to engage in a shoot-out but apart from Pat Horgan who was outstanding, their touch wasn’t consistent and they lacked the confidence for it. Goals were conceded by failure to mark properly. Other teams are unlikely to go zonal against Tipperary and it certainly didn’t work for Cork.

It raised a question-mark over the Cork management that they were unable to improve the second-half performance. This was in total contrast to what Kilkenny did on the Saturday night. They got to half-time and implemented significant changes, which turned things right around.

I know Cork inflicted Limerick’s only defeat of the league but that’s an outlier on all known form, especially the most recent. What confidence they had going in against Tipperary has surely evaporated and it’s hard to see where they take it from here.

Waterford didn’t have a bad league but they were poor in the final against Limerick. From what I saw at Walsh Park last week – like Cork – their touch looked off at the start. Maybe the recovery that got them within a disputed line-ball of nearly getting a draw means that Waterford’s confidence hasn’t taken the knock that Cork’s has but Tipperary were impressive.

Did they look better than they are because of Cork’s inadequacies? Possibly but they are at home for this and will enjoy an upsurge in support after last week’s win.

Waterford have found it difficult against this group of Tipperary players in the past and under Páraic Fanning they have been playing a more orthodox style but I don’t believe that they have the forwards to put up the sort of score their opponents are likely to.

Similarly I had doubts about Dublin’s scoring power going into last week’s Leinster match in Nowlan Park and these weren’t exactly allayed during the defeat by Kilkenny.

Their defence is good, which will make it difficult for Wexford to score but Davy Fitzgerald’s team look to me to be back to their 2017 form.

Wexford fell away against Galway in the league quarter-final but they appear in better heart than last year and I think they probably smell a bit of blood from Dublin because more was probably expected of them against Kilkenny. You sensed that the longer the match went on the heavier the defeat would have been.

Parnell Park will be really tight but that doesn’t suit Dublin’s forwards either. Free-taking was a problem last week. David Treacy missed a couple of run-of-the-mill chances at a time when they were really struggling for scores.

Wexford are well practised at this stage in their system and have players such as Conor McDonald and Lee Chin, who can function well within it. Simplistic as it sounds, if you can score more than the opposition you win and any confidence that Dublin could be that team was fairly undermined last week.

Finally, Colm Bonnar’s done a super job with Carlow. Going into the last few minutes against Galway they were just three adrift – a scenario that any of the other Leinster counties might be tempted to take in Salthill.

They have desire and work-rate and Marty Kavanagh was Man of the Match. Of course Kilkenny should win but if Carlow are competitive again it will be a serious tribute to their positivity. They’ve talked up this opportunity to compete at the top level all year and after week one, they’re walking the walk.