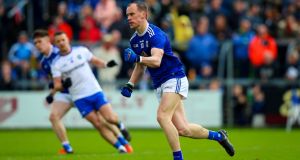 Under Mickey Graham Cavan have transformed from one of the most difficult teams to watch to one of the most enjoyable - and thriving within their new style of play is veteran Martin Reilly.

At 32 years of age he is playing some of the best football of his career in a Cavan team who still like to keep possession, but are no longer afraid to kick the ball and take risks.

For years now Cavan have had inconsistent league and championship results fostering a short handpassing game which centered upon support runners and often led to congested and static spells of possession. Easy to defend against, hard to take the ball from, and not at all easy on the eye.

In their impressive Ulster quarter final win over Monaghan earlier this month however, Cavan kicked one in three of their passes over the 70 plus minutes.

The team maintained control of the game and their own defensive shape by spreading the ball from sideline to sideline. Something which requires foot passing to implement, and from an attacking point of view, stretches the opposing defence.

Also taking the intensity from the opposition’s tacklers and creating pockets of space for long passes to exploit - not too dissimilar to a traditional soccer tactic. This approach is best deployed by Dublin but few other counties are as fluid as Cavan were in Breffni Park at using the full size of the pitch without looking laborious and scripted.

Filling and taking advantage of these pockets their new approach creates is Cavan’s roving number 10, Reilly. In that four point win over Monaghan he had 36 involvements, kicking the ball 12 times with his 30 possessions.

The former Burnley soccer player scored a goal from a penalty, which he created himself with a terrific defence splitting pass from the right wing.

While Reilly often pops up in the pockets of space around the centre rectangle of the pitch, helping the recycling process from wing to wing, he showed here the full extent of the damage he and Cavan’s new tactics can cause.

Other than direct wing to wing deliveries, Cavan often bring the ball into this recycling zone where runners crisscross in and out to either switch the play or decoy and return the ball back to the sideline it came from.

In the build up to the penalty, Reilly collected the ball on the right wing, out by the sideline with time to look up. The Monaghan defence beyond him was tossed and stretched, and he played a perfect long pass into Conor Madden’s mouth to put him one on one with Rory Beggan in the small square, where he was taken down.

This was the sort of risk that would not have been encouraged in previous seasons, and the sort of space that wouldn’t have appeared when playing against Cavan.

He assisted three more scores, two with kickpasses. One of which saw him repeat the trick but this time with a pass over the defence from the left wing, all after taking on his man like he wasn’t there.

As well as being one of the best kickpassers in the Ulster championship, the former soccer pro also has jinking feet that allow him to skip through the lines and make impacts both in transition and when given the time to get his head up. Against Monaghan he took his man on nine times.

In their eight competitive matches this year, the win over Monaghan was only Cavan’s second. Their first was against Roscommon in February, when they won 3-13 to 0-13 but also displayed just why they’ve fallen short in the six others. In that match they missed a possible 1-19.

Reilly himself though has consistently been finding his range and he finished the league as Cavan’s top scorer with 2-14, making him the ninth highest scorer in the top division. Against Roscommon he scored 1-3, all but a point coming from play. Showing that as well as finding the pockets of space out the field or with his boot, he can also fill them in the inside line and finish.

Within 27 involvements and 25 possessions in that encounter against the Rossies, Reilly also showed his industry and desire in winning five breaking balls - often on the toes of the jumpers. Along with creativity and awareness - he took his man on six times and assisted 1-3. Meaning he scored or assisted 55 per cent of Cavan’s total.

While much of this Cavan side are graduates of four Ulster winning Under-21 teams, the former DIT Sigerson Cup medalist only has one piece of intercounty silverware and it’s a Leinster junior title from 2012.

Often the victim of his own adaptability, Reilly has been played in the backs, asked to graft back from the forward line, or left up top with little delivery. But he’s remained a consistent soldier for Cavan, if not an eye catcher.

This year more than ever though we are seeing the best of a player who given more of a free role in 2019 has been one of the most creative footballers in the country.

Always looking to make something happen - a sidestepper, a scorer, and a majestic kick passer. Reilly can be the difference as Cavan aim to reach a first Ulster final since 2001 with a win over Armagh on Sunday.
Since then every other Ulster county has experienced a provincial decider.

So Cavan’s kickpassing conductor, finally given the full license to express, must show why the Breffni county are right to back him and themselves and finally start competing again.