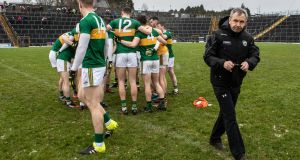 “Johneen, a chroí, don’t take that job at all, they’ll be giving out to you.”

Among the many delicate passages in Keys to the Kingdom, Jack O’Connor’s story of “an outsider who led Kerry back to glory”, are these last dying words of his mother, Sheila, spoken from her hospital bed in October 2003.

What else could she have meant only the pressures of being Kerry football manager?

Long before O’Connor’s time it wasn’t so much an appointment as an anointment, and a job which came with near sacred expectations. Winning at least one All-Ireland is the very least of those, something the last five successive Kerry managers delivered: Eamonn Fitzmaurice, Jack O’Connor, Pat O’Shea, O’Connor again, and the late Páidí Ó Sé.

Trace the trail before that and after Mick O’Dwyer’s 16 unbroken years, and eight All-Irelands later, Mickey Ned O’Sullivan and then Denis “Ogie” Moran did six fruitless seasons, where at times the pressure and expectation became a little too much.

Even with success comes some giving out: Fitzmaurice stepped aside after last summer’s Super-8s, a box full of anonymous letters part of his reason why, and it didn’t end pretty for Ó Sé either, even if his legacy as Kerry manager will always be about revitalising the county’s standing in the football world, twice returning the All-Ireland to its most accustomed home, in 1997, and 2000.

Still O’Connor knew about the pressure better than anyone, being the so-called outsider, only instead of heeding his mother’s last words he used them as moral incentive. Some more giving out and three All-Irelands later and the rest is Kerry football history.

When O’Connor decided on a hiatus in 2007, Kerry found O’Shea willing and able to deliver an All-Ireland that very same year, before closely losing the 2008 final to Tyrone. Still his term proved seamlessly successful when he stepped aside and O’Connor returned to the job in 2009, winning a third All-Ireland, making him the fourth most successful manager in the county’s history.

Then in came Fitzmaurice, who two years after O’Connor stepped down, delivered the 2014 All-Ireland to Kerry, the last county outside the capital to lay hands on it. It was meant to be Fitzmaurice’s job until 2020, before the giving out got a little too much.

Next into that lineage is Peter Keane, no outsider but nonetheless relatively unproven at senior level, his main success coming last summer when, in his third season as Kerry minor football manager, he guided the county to a fifth successive minor All-Ireland.

Keane is certainly no stranger to Kerry football, his popular businesses in Killorglin already making him something of a public figure in that part of the county, as well as his native Cahirciveen. Like all those Kerry managers before him, he knows that delivering one All-Ireland is the very least of the expectations.

“And I am enjoying it, even though it is very busy, particularly in that league period where it’s game after game. But again if you don’t embrace it you are in right trouble, because it will get the better of you.”

Keane’s first championship journey, typically for Kerry, begins without any instant pressure: Kerry are the last county into the championship, some teams with two games already under the belt, Saturday evening’s Munster semi-final against Clare at Cusack Park in Ennis a repeat of last year’s fixture, which Kerry won by 22 points. Some of the most faithful supporters might well be more fixed on events in Madrid, where an hour later Liverpool take on Spurs in the Champions League final.

For Keane (47) the focus for now is all about the journey, not the destination. He has an old yarn by way of explanation: “I remember learning to drive and I remember going out the main road. I was inside in the car with my father and we were driving out the road, from Caherciveen, and heading out to Valentia Island.

“We were at the Points Cross, which was only a short bit out, and I started asking a question about a road that was about two miles out. And he chewed me, and said, ‘We’ll worry about that when we get there . . . at the moment we’ll worry about this.’

“So there’s about as much point as me worrying about a Dublin or anyone else worrying about a Tyrone or a Mayo or someone else. We have Clare in the first round and we’ll see where go from there. I’m new coming in here, a brand new management, there were retirements of senior players, new players last year, and a lot of new players this year. So you had to throw all them into a pot and stir it up and see how it went.

“So I’m certainly not focused on the Super-8s. That’s not a throw-off to you, to say ‘go away with that old talk’. Because all I can worry at this time is game by game. Every day is a learning day. It’s a cliché, but it’s true.”