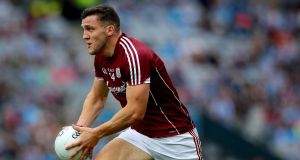 Galway football captain Damien Comer has admitted that he is unlikely to be fit in time for the Connacht final against Roscommon, on Sunday June 16th. He hasn’t played this year after sustaining an ankle injury in a charity soccer match last Christmas.

Speaking at Thursday’s launch of SuperValu’s ninth year as football championship sponsors, Comer was pessimistic about making the final, which had originally been identified as a return date.

“I think the Connacht final might come a bit soon but I’d be hoping to be back for whatever comes after that,” he said. “I’d love to make it back if it turns around in the next couple of weeks, maybe. But at the moment I doubt it. I need to give it time.”

He said that whereas it had originally been hoped that he could recover without surgery, he had undergone a procedure for a fractured bone in the ankle, in early March.

“The first scan didn’t show up any fracture but I knew myself that there was something not right. It was the worst pain I ever had and I have twisted my ankle a few times.

“ ‘Grade one ligament’ came back first, then in a boot for a week or two then trying to get back on it, a bit of bony bruising; it wasn’t getting better, then a re-scan showed a fracture. Delayed it by seven weeks - operation in early March: 12 weeks today.”

In Comer’s absence Galway had a reasonable league campaign, falling short of reaching the final on the last day, against Tyrone. Since then, the county have had routine championship victories over London and Sligo and now face Roscommon for the third successive provincial final.

“Yes, I’m going through the pain threshold, I’m not giving myself a time. If I can get through it and there is no pain then I know I’ll be ready to go. At the moment I’m working with the physios and they’ll guide me as to how much I will do.”