TV View: Porridge, Mass and a madness for the ball prove winning mix 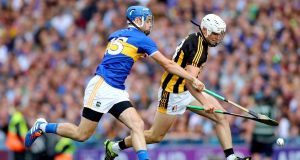 “Today,” said Donal Óg Cusack, “is like Christmas Day for hurling people,” but while he went on to tip Tipp to triumph on this festive occasion, he reckoned it would be by no more than a couple of points. In the end, it was as if all Tipp’s Christmases had come at once in the shape of a 14 point victory over, of all people, Kilkenny. Come full-time, they were like the cats who got the cream.

Anthony Daly had tipped Tipp too, but he didn’t see the mullering coming either, although he was briefly distracted during his pre-match analysing by the sight of the parade, him dismissing the notion that the tradition was a bit of a pain for the players. “I always loved it,” he told Joanne Cantwell, “there’s no one who gets 2-4 off you in the parade”.

The trouble starts, then, when the match actually commences, beforehand it’s just about controlling your nerves and getting your head in the correct location, as Angela Downey (with just the 12 All-Ireland medals) and Ken Hogan (the two) told us when they bumped in to Clare McNamara before the game.

Angela’s son Conor Browne was on the Kilkenny team and Ken’s lad Brian was following a family tradition by taking up position in the Tipp goals, so the parents were closer than most to the build-up the to final.

How was Conor all week? “Monosyllabic,” said Angela. How was Brian this morning? “Grand,” said Ken, “his mother had porridge made for him and then it was 8.30 Mass in Birr.” Your advice to Brian? “Be mad for the ball.” Porridge, Mass and a madness for the ball. Hurling has changed in many ways, but its rudiments remain the same.

Match time and almost as soon as Marty Morrissey mentioned how sunny it was, the deluge began. “It’s absolutely spillin’ down out of the heavens,” said Michael Duignan. A minute or three later - Marty: “We now have glorious sunshine!” Four seasons in 90 seconds, like.

And soon after, the moment that we shouldn’t be fixating on, because our Tipp cousins will block us on Facebook for not focussing on their lads’ excellence. But sure, look.

Did Richie Hogan deserve a red card for his arm/elbow making contact with Cathal Barrett’s cheek/chin?

It was a no from Michael, largely because it was a rainy day; it was a no from the Sky lads (Ollie Canning: “I would have some sympathy for Richie . .. he’s not a dirty player”; Jamesie O’Connor: “I’ve massive sympathy for Richie, it’s a greasy day”); and it was a very definite no from Henry Shefflin (“It was dangerous play, but maybe a yellow card . . .. I think he’s unlucky that his arm kind of strikes Cathal in the helmet”).

It’s not often Donal Og is lost for words. But the look he directed at Henry read, in so many words, ‘DO YOU KNOW YOUR ARSE FROM YOUR ELBOW?’ Although he did stop short of suggesting that Henry excusing the inexcusable was another of the last remnants of British culture on these islands.

Anthony was on Donal Og’s side, but opted not to raise the arse v elbow v upper arm issue because things were tense enough, although after viewing the decisive angle of the incident he was quietly asking himself about Henry’s anatomical knowledge.

Second half and there were times it seemed like Tipp had 15 extra men. “Bubbles is his name, scoring is his game,” Marty hollered when John O’Dwyer converted a De Bruyne-esque pass from Seamus Callanan for Tipp’s third goal. It had turned in to a procession. And those who claim they forecast as much should pray there isn’t a lie-detecting machine handy.

There was an f-bomb from Callanan during his post-match chat with Clare - “it’s everything we ****ing dreamed of ….. [PAUSE]…… dreamed of” - but if you can’t forgive him that, then you deserve a sporting punishment along the lines of having to play a round of golf with Bryson DeChambeau.

Callanan then thanked the bulk of the planet before raising Liam MacCarthy in to the air, but especially Liam ‘Santa’ Sheedy for returning to the fold to deliver the ultimate pressie down the chimney.

Back in the studio, meanwhile, Henry was arguing that the red card killed the game. “Common sense would have been a yellow,” he insisted.

If looks could kill, Donal Og’s side-eye would have had Henry 10 feet under.