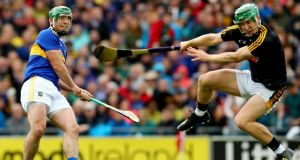 Like father, now the son, a first choice All-Ireland-winning goalkeeper at 23. Spared any major saves by the flawless defence in front of him, mixed his puck outs with increasing accuracy as the game progressed. Rating: 7

Got stuck on and into Richie Hogan from the gun, ended up on the receiving end of the elbow which saw Hogan sent off, cleverly playing the extra-man role to the finish. Immense, fearless and beastly effective. Rating: 8

Took on and kept scoreless an ailing Adrian Mullen, at 23 worked relentlessly across the full-back line, unlucky not to point in the first half, super reading of the game on and off the ball. Stood up and out, loud. Rating: 8

Took the bull of the game by the horns and never once let go, keeping Colin Fennelly to one point, displaying magnificent confidence and maturity at 23, ending a dead-heat contender for man-of-the-match with the McGrath brothers. Rating: 9

Wow. A year on from a torn cruciate, covered up TJ Reid to a point from play, his race car engine roaring throughout, and like those around him worked heroically into the game. Super game from the Borris-Ileigh man. Rating: 8

The colossal of a rock that again refused to budge, blocking and hooking like a warrior, at 30 showing no signs of age. Lorded that central defence role like he it was built for him. Rating: 8

Grew in stature and status again, incredible work rate rewarded with him chipping over two points from play in either half, and keeping Walter Walsh in the passenger seat for most of the afternoon. Rating: 8

Young Hurler of the Year a decade ago, now the best midfielder in the game, another majestic afternoon of assisting more ball and scores that could be tracked, adding a free and a point of his own. Inspired afternoon for the man from Loughmore Castleiney. Rating: 9

The perfect midfield ally and stuck to every task laid out in front of him, scoring Tipperary’s opening point when they needed that settler, starting some of the majestic forward runs of the second half. Rating: 7

Workman-like as an understatement, ensuring the lid was kept on the influence of Paddy Deegan and company in the Kilkenny half -back line, foraging as ever when ball was required, before making way for Willie Connors. Rating: 7

Suitably bubbled up and over as the game progressed, finishing with 1-2, his goal sweetly laid on by Séamus Callanan, and repaid with sheer force and brilliance. His second point from play on 65 minutes, even if in space, was superb, and he knew it. Rating: 8

Yesser, his goal on 25 minutes, right when Tipp needed it most, brilliantly finished with force and accuracy in the bottom right of the net. Suddenly Tipp were level, and more importantly never looked back. Rating: 7

The new model of accuracy and perception, his game tally of 0-8, between frees, 65s and two from play, bringing his championship contribution to 2-68. Reliable to the first and last call. Rating: 8

The man with the Midas wrist only needs one moment, and incredibly, his goal two minutes into second half completes eight matches of the summer with at least one goal in each. Fitting for their commander in chief he hit the last free of the game too. Hurler of 2019. Rating: 7

A beautiful redemption song, after being sent off in the semi-final, his early hook on goal-bound Colin Fennelly a siren of his intent. Finished with three points from play, and like his brother Noel a Tour of Tipp Force from end to end. Rating: 9

Five points from the bench, all from play was the icing on the cake: one each from Jake Morris, Mark Kehoe and Ger Browne, and two from straight down the middle from Willie Connors. Rating: 8

Second coming as good as the first, Liam Sheedy becomes the first manager to defeat Brian Cody’s Kilkenny in a second All-Ireland final. Repaid in fate and faith by his players. Rating: 9

1 Super Rugby AU offers glimpse of rugby’s future if law changes are adopted
2 Klopp to rest Lallana to ensure he remains fit for transfer
3 Pete Sampras: The forgotten great with the best serve in the business
4 Cam Newton broke the mould: Can his flame be rekindled at the Patriots?
5 Tipping Point: DeChambeau’s transformation raises questions, but who will ask them?
Real news has value SUBSCRIBE