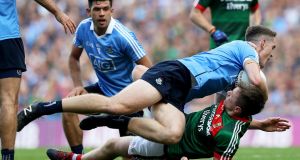 So after all the ins and outs of the championship, the hand wringing over dead rubbers and some epic reinvention, we find ourselves back with the same four All-Ireland semi-finalists as we had the year before the Super 8 experiment began.

There’s nothing like a seasoned Broadway production to bring in the crowds and Croke Park will be packed on Saturday for the eighth revival this decade of Dublin and Mayo.

There’s something too wholesome and cheery – even in recurrent adversity – about Mayo for the vampire imagery to work absolutely but this team’s journey from the margins of their latest despair over the past four years has been undoubtedly disturbing for many of their opponents.

Whatever happened Donegal a week ago, they were a haunted looking collective by the time it had all ended and that was despite getting a gilt-edged invitation to the reopening of the match as a contest in the second half.

From Dublin’s perspective, Donegal should have looked the most unwelcome of semi-final opponents. It’s only weeks since Oisín McConville identified them without any great dissenting reaction as the team most likely to trouble the champions.

It wouldn’t be surprising at this stage though if Dublin would have preferred anyone except James Horan’s team to be waiting for them given the sheer unpredictability that Mayo bring to these matches.

It’s all very well to wonder why Dublin have never quite hit their straps in these fixtures or indeed to question why Donegal were so poor in Castlebar but without detouring too far into philosophy, JP Sartre has the answers.

“In football everything is complicated by the presence of the opposite team.”

And few teams complicate things for Dublin to the extent that Mayo have done even when failing to win a single one of the last six championship meetings.

It’s true that they haven’t managed fatally to daze the Leinster champions since 2012 when a lead of 10 points going into the final quarter proved (just about) adequate once David Clarke had made a terrific save from Bernard Brogan but all of the contests have thrown up curve balls with which Dublin have struggled to cope.

Some of these have been sent by pure misfortune. In the 2015 draw, Rory O’Carroll – then the best full back in the country – had to go off injured in the fourth minute whereas three years later in the final Jack McCaffrey banjaxed his cruciate, also just minutes into the match.

Mayo aren’t going to weep salt tears about the injury woes of others after the current summer maintained its wrecking trajectory by ending Jason Doherty’s championship last week but there have been other unscheduled departures by top Dublin defenders – James McCarthy and Jonny Cooper – on black cards in the early stages whereas Mayo lost Lee Keegan in similar circumstances before half-time in the 2016 final.

Any of these types of mishaps can have a bearing on outcome and indiscipline is especially reckless, as Mayo learned from the Donal Vaughan-John Small set-to, two years ago.

Dublin are undoubtedly undercooked. This year, Omagh was supposed to provide the only real stropping leather of the summer for Dublin but circumstances robbed the encounter of any potential for sharpening the knives.

On the other hand ,Mayo’s intensity and force of will are going to be hard to replicate a week later and after a similar, high-octane performance in Limerick to beat Galway, they deflated eight days later in Killarney.

Donegal’s protagonists were easily identified and Keegan and Paddy Durcan did well on Michael Murphy and Ryan McHugh although the former wielded a fair amount of influence.

Who to confront on Saturday: Ciarán Kilkenny, who Keegan largely nullified in 2017 or Brian Fenton, McCaffrey, Con O’Callaghan, Paul Mannion, all of whom have struck wounding blows in the past and on form, are capable of doing the same again?

If the worst of the weather comes to pass it will take the sting out of Dublin’s pace just as it helped in the taming of Donegal in Castlebar but it doesn’t eliminate it completely as an influence.

There is a view that Dublin’s defence can be got at although one goal conceded in six matches is a healthy record even if the opposition weren’t packing the biggest weaponry.

Mayo’s defence has again been the strongest part of James Horan’s team. Colm Boyle’s regained form together with Keegan and Durcan and the wiles of Keith Higgins have been immense but this is their biggest task and that is because they haven’t been scoring reliably enough.

Andy Moran’s 20-point target for beating Dublin hasn’t even been achieved against other teams with the exception of Meath.

Aidan O’Shea has been struggling manfully without adequate back-up and if Matt Ruane is fit for a prolonged run, Mayo will be competitive but can they hold Fenton and James McCarthy/Michael Macauley for 70 minutes?

It’s completely likely that Mayo will be revved up to answer fire with fire but there are too many other questions to expect what would be an epic turn-up, given the stakes for Dublin.