‘To try to take them on with 14 was a bridge too far, definitely, and that’s how it turned out’ 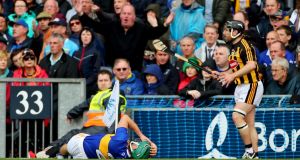 Brian Cody is loathe to linger on Richie Hogan’s red card. He knows that this, possibly retaliatory, act ruined Kilkenny’s chance to deny Tipperary a seat at the table of modern greats.

Everybody knows the score.

Question one for the Kilkenny manager was about Hogan’s dismissal on 33 minutes for elbowing Cathal Barrett (the Tipperary defender conceded a free but received no card despite opening Hogan’s face on 15 minutes).

We returned to this topic despite promptings from former GAA president Nickey Brennan–- a welcome addition in the ranks of sports writers – to introduce other topics.

Sorry, Nickey, but with the body still warm the moment that forever tips the scales of this All-Ireland final needs investigating.

“I was close to it, and I was amazed. I am the manager of the Kilkenny hurling team, so I didn’t want it to be a sending off. I hadn’t a clue to be honest. I saw he turned and he went down.

“Look, it’s a huge decision to make to issue a red card. You want to be very, very definite before you do a thing like that, and certainly it took the referee a long, long time to make up his mind and decide ‘I wonder what that should be.’

“He consulted himself, he consulted his linesman, he consulted the player himself by going over to look at him, and I would say if he knew for certain what it was going to be he would make his mind up straight away . . .”

Cody accurately describes the behaviour of referee James Owens. The precise actions, calmness under enormous strain, that people have been crying out for from officials ever since Lugh and Setanta pucked about in Táin Bó Cúalnge.

“What do you think?” Cody asks the reporter

“He made contact to the head with his elbow.”

“He made contact. So you are very, very definite?”

Brennan, who soldiered alongside Cody in the 1970s, asks about TJ Reid, but the sending off of a four-time All-Star with seven All-Ireland medals is still on the agenda.

Did you talk to the referee afterwards?

In early 2019 a decree came down from high that contact to the head would and could only be penalised by a red card. Cody’s view was sought on this directive.

“Right now I am not going to start pontificating on my views on anything. All I can say about the red card today is that it appeared to me that the referee was absolutely not certain what to do. He decided he would give him a red card. That’s what he decided. You better talk to him.”

Owens, nor any referee, is not made available to the media after this or any game. Everybody knows that too.

Another reporter laughably put it to Cody that social media are overwhelming proving that the majority of Ireland – no, actually, the inhabitants of planet Earth – believe it shouldn’t have been a sending off.

“Well that’s further indication of whatever," Cody said, before quickly adding: “I don’t want the story coming out from here that I am whinging about that incident in the game. I am here as a manager of the Kilkenny hurling team who I thought fought heroically right throughout the whole game; who right throughout the whole year played magnificently to get here against the odds of all of yourselves and everybody else. I am not being smart about that. That was the general expectation for the team. We have played outstandingly well.

“Today, again, right up to half time, who could have predicted the winner? Unfortunately we lost a player. That’s why it is being spoken about. We lost a player. There are divided opinions on whether it should or shouldn’t be [a red card]. Obviously that’s what happened to us. We weren’t good enough to take on Tipperary down a player. It’s that simple.”