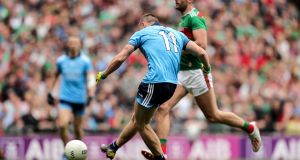 In a way the competing theories were both correct. Mayo had too much mileage up this summer and it told in the end whereas Dublin were indeed undercooked but after what may well have been a half-time roasting, they were lethally ready to serve in the second half.

The force de frappe on the resumption put the match away in 12 irradiating minutes. An unanswered two goals and six points made dust of Mayo’s two-point lead at the break. The first goal although it only gave Dublin a one-point lead, was the turning point.

It was the intervention that Mayo must have been dreading. Goals have always beaten them in this fixture and cumulatively they trailed 5-11 over the seven meetings this decade.

To make bad worse, the scorer, Con O’Callaghan, had been earmarked for the Mayo’s highest recognition - the assignment of marking duties to Lee Keegan, who had hunted Michael Murphy to distraction a week previously.

As early as the fourth minute, Keegan was required to intervene to put his man off a goal chance but it was noticeable that O’Callaghan had taken him on from the start.

Keegan had the better of the rest of the first half and the Cuala forward had to drop deep at times even to get the ball but within two minutes of the restart, the latter had run on to Ciarán Kilkenny’s pass to go for goal and this time made no mistake. Mayo’s go-to marker was in trouble.

It took O’Callaghan’s second goal to prompt a switch but the first one did the damage. It mightn’t have brought the house down but it was a stick of dynamite on the supporting pillar.

Liberated, Keegan showed his customary artfulness in the square to score a third goal against Dublin in the 52nd minute but it would be Mayo’s only score in the midst of a run of 3-7 for the champions.

For a team at their stage of the life cycle, Mayo really needed to be avoiding the arduous qualifier route and even in the quarter-final group, a do-or-die final fixture required the writing of cheques that ultimately couldn’t be cashed.

Dublin, having laid waste to Leinster and cantered through the quarter-final stage having been spared by dead rubber their most forbidding looking fixture, were graphically struggling in the first half on Saturday.

Mayo brought everything they had in their locker: aggression, work-rate on overtime, counter-punching and above all, the manic energy of their defensive plays. It’s really unusual to see Dublin players isolated without an obvious out-pass and turned over when they settle into the remorseless rhythm of their attack but it happened several times in the first half.

Con O’Callaghan was stripped of the ball as he looked frantically for an option. Jack McCaffrey, having laboured in unaccustomed anonymity due to the limpet marking of Patrick Durcan, finally got a runway on half an hour, sped off, ran into road blocks and as he tried to elude them, was dispossessed by a recovered Durcan.

James McCarthy was turned over by James Carr. Even Brian Fenton, trying to restore order in the middle, as Dublin were knocked out of their possession-based play and the comfortable platforms of recycling the ball and reloading the attacks, was dispossessed by Aidan O’Shea just before the break.

Paul Mannion also struggled. A poor Robbie Hennelly kick-out gifted him a sniff of a goal chance and he flashed it over the bar. The Mayo goalkeeper, back in the team after David Clarke’s injury had a torrid time on his restarts, especially in the third quarter where a sustained sequence of four turnovers led to four points in two minutes.

In his defence Dublin were beginning to dominate their opponents on contestable ball.

Arguably, Jim Gavin’s side hadn’t had a high-pressure, sudden death fixture since the All-Ireland final against the same opponents two years ago. That showed. Confronted by a team, high on confidence after the high-stakes dispatch of Ulster champions Donegal, the champions looked thin on ideas.

The looming problem for Mayo was that at the break, a two-point lead looked a poor representation of all they had brought to the game at that point. It wasn’t the recurring problem of not taking their chances. In the entire first half, they kicked just one wide and dropped another short.

In general the shots were well selected and efficiently executed. For instance Colm Boyle, again looking rejuvenated in what has been a fine season, took leave of his primary task, Ciarán Kilkenny, to push forward and kick a terrific point from the 45-metre line in the 32nd minute. In other words, they hadn’t left much behind them.

Among the criticisms of Mayo was that they should have been better fortified at half-time to expect the push-back but it was hard to argue with the opinion that the third quarter display was the best of Jim Gavin’s management.

In the peripheral intrigues over the return of Diarmuid Connolly and who makes the match-day panel, the champions have crept up to within a match of the immortal five. Hard to see it being stopped on this form but as was being pointed out afterwards, Kerry also won their 1982 semi-final by 10 points. It ain’t over till it’s over.