The key moments that made Tipperary All-Ireland champions 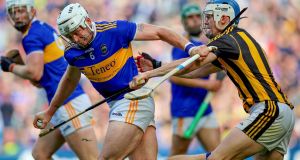 Tipperary’s Padraic Maher wins the balls and burst out of his defence. Photograph: Tommy Dickson/Inpho

In the 25th minute Jason Forde had just scored a 65 and then a free, Tipperary’s fourth and fifth points. They’d only scored one of those five points from play and despite a penalty shout, they’d been second best for the large part of the opening exchanges. Then a long Eoin Murphy puck-out was plucked from the sky by Padraic Maher, Niall O’Meara played a one-two with Jason Forde, the green flag was raised and it was a level game. In all Tipperary retained 77 per cent of their restarts, while Kilkenny retained only 35 per cent. And at the key moments it was Tipp who time after time again emerged with possession from the Kilkenny puck-outs, none more crucial than this one. It meant Kilkenny’s strong start had counted for nothing.

After 33 minutes Kilkenny had been the better team for longer periods, albeit they trailed by a point and Tipperary had scored 1-4 in the nine minutes previous. Cathal Barrett had earlier caught Richie Hogan with a high tackle, giving him a nice war wound on the nose. This time Hogan spotted Barrett on his back foot on the sideline and came in for the hit. But he mistimed it and caught him high with his elbow. You just won’t get away with that in the modern game, well at least that was the case for one of them. Hogan had been one of only two scorers from play for Kilkenny in the first half, but had to watch his team be outscored 2-17 to 0-10 for the remainder of the match, from the dugout and with a busted nose.

Séamus Callanan has scored some pretty remarkable goals, but his eighth in as many matches was that of a true poacher. The Tipperary captain credited his team’s sprint coach in his acceptance speech, and he showed razor like reactions and powerful acceleration to get to John McGrath’s saved shot first, slide in and all at once pull on the rebound to an empty net. Which was more of a validation for the sprint specialist than any words could match. A goal in every game, incredible.

Coming into the final 15 minutes, John Donnelly had just sent over his third point in an impressive individual showing when Tipperary substitute Mark Kehoe got on the ball in the half forward line and ran right down the heart of the Kilkenny defence. He couldn’t be caught, legally, and Jason Forde scored the free that he won. Kehoe scored Tipperary’s next point, and of their eight points in the final quarter of an hour, five were scored by substitutes. Four of the five players they sprung off the bench scored, and while Tipp had a lead to play with, they also had four scorers come into the fray in their semi-final win over Wexford.

Tipperary’s fullback line had the added protection of an extra man in the second half - but Barry Heffernan and Ronan Maher dealt with aerial bombardment after aerial bombardment. By the hour mark any other team would’ve been written off but Kilkenny’s heads were not down, and only for a moment of utter selflessness from Padraic Maher that stubbornness could quickly have become belief. Maher blocked a certain goal, with half hurl and half arm. Total superman. Then when the ball fell into a ruck it was their centre back who got up to take it out. That’s the commitment that wins All-Irelands. His switch on to Walter Walsh in the first half was crucial. Kilkenny's best goal chance before then was in the third minute when Colin Fennelly was expertly hooked by Ronan Maher before pulling the trigger, after great work by Walsh. More bravery, more perfect skill execution, that's what champions are made of.