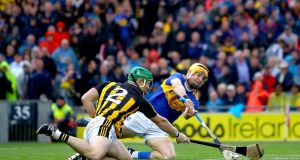 In their imaginations, every Tipperary game ends like this. Score after score dispatched from all angles and distance, every player trying his luck without censure or caution. They drenched Kilkenny the longer the second half went on here and watched them dissolve.

In doing so, Tipperary picked up their third All-Ireland of the decade. Let nobody call them underachievers ever again. They had 14 points to spare here in a game that turned on the sending off of Richie Hogan just before half-time.

Up until then, it had been a day of nervy to-and-fro, little to choose and nothing spared. Down a man for the second half, Kilkenny’s hold on Tipp weakened and slipped and that was that. They were outscored 2-16 to 0-9 after the break. A rout.

Not that anyone saw it coming for the opening half-hour. Far from it. It was, by colour and shade, precisely the type of day that was supposed to suit Kilkenny. The rain came a couple of minutes in, as if ordered online the night before by Kilkenny folk nationwide and just about making its deadline. The hits were heavy, numerous and not occasionally indiscriminate. Long swathes of scoring came from placed balls alone. The lights were on by half-time.

Draw up these terms and conditions beforehand and anyone reading them would have asked merely by how many did Kilkenny win. But that assumes the existence of Old Tipp, flighty old, flaky old minstrels only good for when the mood takes them and when the light slants in a particular angle of their choosing. This Tipp is not that.

True, for a while, they didn’t look like very much of anything. Kilkenny bent the game’s opening to their own will. The exchanges were tight, Kilkenny wound them tighter. The frees were racking up, Kilkenny handed the ball to TJ Reid and the umpire reached for the flag. By the 20th minute, they were 0-8 to 0-3 ahead – of those 11 points, only three came from play.

Jason Forde kept Tipp in touch with a couple of 65s and some equally crisp free-taking. And when you carry the sort of goal threat Tipp do, ‘in touch’ is as close as you need to be. On 26 minutes, Pádraic Maher came down from the clouds with the sort of catch nobody was taking during the early exchanges.

He drove forward to find Séamus Kennedy, who in turn fed Niall O’Meara over by the Cusack Stand sideline. O’Meara took off on a gallop, turning Conor Fogarty this way and that until he was twisted into a plait. His shot was low and skiddy on the wet grass and Eoin Murphy’s dive couldn’t match it.

All the action and colour from Croke Park VIEW NOW

So just like that, despite having taken shellfire for most of the opening period, Tipp were able to wipe the dirt from their eyes, shrug their shoulders and assure each other they were fine. They had been behind since the 46th second of the game. Now they were level. Forde iced another to put them ahead a minute later. And for the rest of the game, they spent no more than 30 seconds in arrears.

The game’s major talking point came three minutes before the break. Cathal Barrett beat Hogan to a ball out on the Hogan Stand sideline and the Kilkenny man came in to try to shoulder him out over the line. He lifted his elbow a smidge too high as he did so and caught Barrett plumb on the jaw. It wasn’t spiteful but it was dangerous and after a long consultation with his linesman, James Owens produced the red card.

Hogan was disgusted and Brian Cody and James McGarry spent the remainder of the half coursing the officials. But the replays made it hard to argue with. Hogan walked and the game was blown apart.

You know those games where you hear it said that the sending off didn’t make much of a difference? This wasn’t one of those. Tipp had been on the verge of making a substitution in their defence, with Ger Browne doing his final stretches on the sideline just as the free was given. As soon as Liam Sheedy saw the red card, he sent Browne back to his seat.

Tipp reorganised and made Barrett the spare man in defence. Although their second-half total of 2-16 would suggest that the Tipp forwards ran riot – and they did – it was the defence that handed them the Molotov Cocktails.

Barrett, the Mahers (x3), Barry Heffernan and Kennedy mopped up everything in the Tipp defence. Some of it was brilliant defending, some of it was by dint of having the extra man. All of it was hollowing for a Kilkenny side that was increasingly running out of road.

At the other end, the Tipp attack was like a rose whose petals were starting to fall open as the sun came out. Three minutes after the break, Séamus Callanan continued his Jamie Vardy run of scoring a goal in every game. Eight championship days this summer, eight goals in a row – this one a flick on a loose ball after natty work by Forde and John McGrath. It put Tipperary 2-9 to 0-12 ahead in the 38th minute and they were never caught.

Nor close to it, for that matter. Callanan followed up with his first point from play from a gorgeous diagonal ball by John O’Dwyer and within a minute, Bubbles had a highlight-reel score of his own on the board, nailing one on the run from the right sideline. The game was getting away from Kilkenny like soap in the shower.

Walter Walsh staunched the flow with a point off scraps around the orbit of Colin Fennelly but it was only momentary. Soon after, Kennedy bombed forward for a rousing score and when Callanan found a criminally unmarked O’Dwyer on the edge of the square a minute later, all it took was a flick and swipe from Bubbles and the thing was over.

In the space of seven minutes, Tipp had gorged themselves on 2-5 to Kilkenny’s 0-2. Much like the Dublin v Mayo game here eight days ago, a day that had been tense and taut was suddenly stripped of all drama. It was like the two sides had eyeballed each other at a red light only for Tipp to floor it when they saw green while Kilkenny missed their gear and stalled. By the time they got moving at all, Tipp were a dot on the horizon.

Everything else was really just record-keeping. The closing half hour played out as a bonanza for the Tipperary attack, with Bubbles, Callanan, John McGrath and a host of subs all fattening themselves on training ground scores. Kilkenny needed goals to get back into it but never threatened one.

To Tipp the spoils, then. To Kilkenny, a cold winter. To the rest of us, a long one until we go again.

Crowds of 4,000 to return to sporting events in England from next week 17:32
Former Ireland assistant manager Maurice Setters has died aged 83 17:06
Davy Russell on neck injury: ‘it was a very close one and I dodged a bullet’ 17:00
Aidan Coleman steps in for the ride on returning Epatante 17:00
Spurs chairman Levy warns of ‘irrecoverable loss of income’ if fans don’t return 14:03
Crossword Get access to over 6,000 interactive crosswords